Amazon announced plans for a new corporate headquarters in September 2017,[1] setting off a frenzy of bids (238 proposals) as well as speculation as to which city would win the competition. On November 13, 2018, it became official, Crystal City, Virginia—just south of downtown Washington D.C. and the location of Ronald Reagan Washington National Airport—would become home to a new headquarters for Amazon, splitting the overall planned expansion with New York City.[2]

Chmura Economics & Analytics was honored to perform the economic impact analysis for the Crystal City expansion on behalf of the Virginia Chamber Foundation. This impact analysis included a study of the job, spending, and tax effects projected to result from Amazon’s new headquarters in Northern Virginia.

The ecommerce giant plans to steadily expand from an initial 400 employees in Crystal City in 2019 to 25,000 employees in 2030. In addition to these jobs, new projects such as this create “ripple effects,” jobs and other benefits that result from economic activities related to the development.[3] Including these ripple effects, the overall impact of the Amazon’s new headquarters in Virginia is estimated to increase steadily from 2019 onward: from $210.7 million in spending[4] and 1,076 jobs in 2019 to $14.2 billion and 59,308 jobs in 2030. 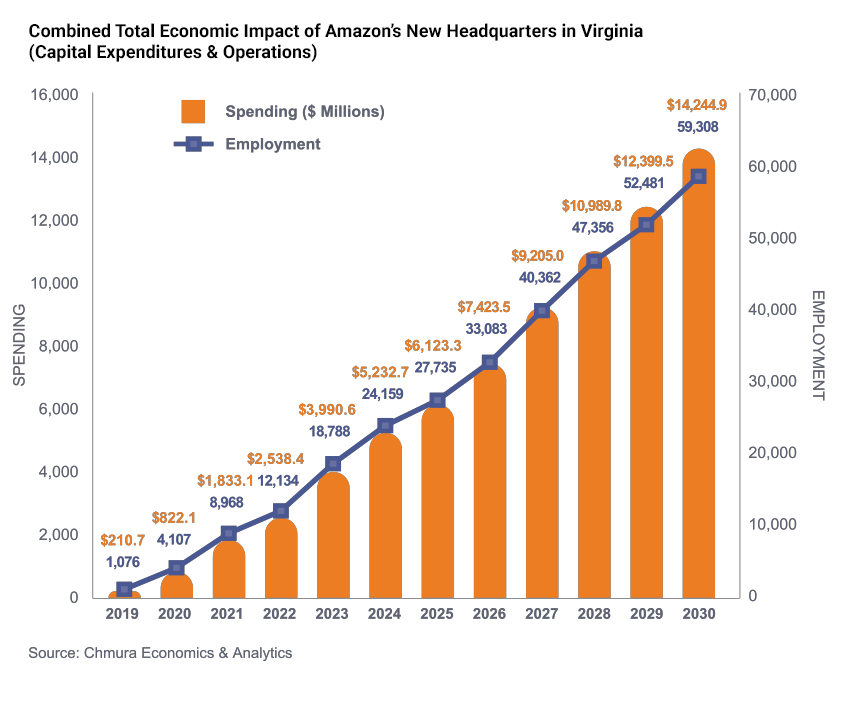 From 2019 through 2030, based on the total economic impact (including ripple effects) of Amazon in Virginia, the Commonwealth can potentially realize $1.83 billion in additional tax revenue, mainly through individual income and sales taxes. 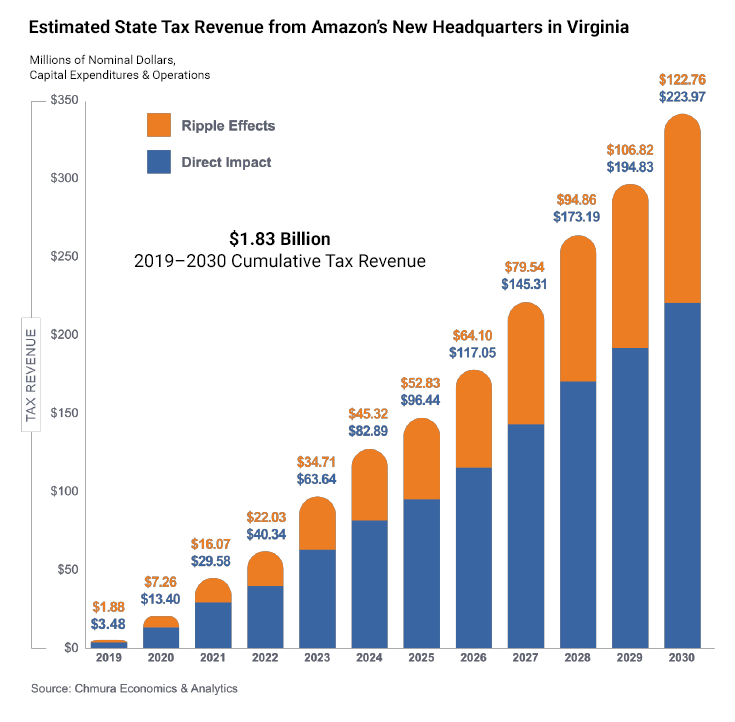 [2] It was announced that headquarters would be built both in Northern Virginia and New York City, with both locations hosting 25,000 jobs, and that in addition a new 5,000-job operations hub would be built in Nashville.

[3] For example, when a company expands into a new location, the firm will likely purchase some supplies and services from local companies—creating spending and new jobs for these suppliers. Furthermore, the new employees spend some of their wages at local establishments (such as at stores, restaurants, and health care providers), resulting in additional job creation at these retail and services employers.