The Five Horsemen of a Recession

On July 28th the Bureau of Economic Analysis (BEA) reported that real Gross Domestic Product (GDP) declined at an annual rate of 0.9% for the second quarter of 2022, marking the second consecutive quarter of decline.[1] To many observers two consecutive quarters of decline in real GDP indicates an economic recession. However, the process used by the National Bureau of Economic Research (NBER), the agency charged with determining recession dates, is not as clear as most would imagine. NBER takes a wholistic view of economic activity, monitoring real personal income, employment, personal spending, retail sales, and industrial production.[2]

Repeated reports of high inflation rates are certainly concerning for both businesses and consumers alike. Figure 1 shows continued declines in real personal spending compared to a year ago, meaning that even if personal spending is increasing, relatively high price levels are dampening the effects of that spending. However, there are several indicators tracked by NBER that indicate stable economic activity. A particularly healthy metric is the current job market, shown in Figure 2, which reached nearly 152 million workers during June. Since the beginning of the year, the labor market has added nearly 400,000 jobs a month, which is not what one would expect during a recession.[3] 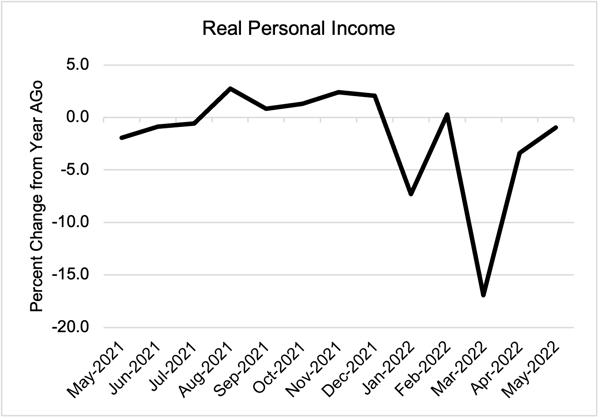 Other data points also imply a relatively stable economy. For example, Figure 3 shows continuous growth in personal consumption spending despite heightened price levels, implying that elevated inflation is not yet altering consumer spending habits. Figures 4 and 5 also show growth in both retail sales and industrial production through the month of June, implying consumers and businesses are continuing to make purchases and are optimistic about sales from production in the short term. 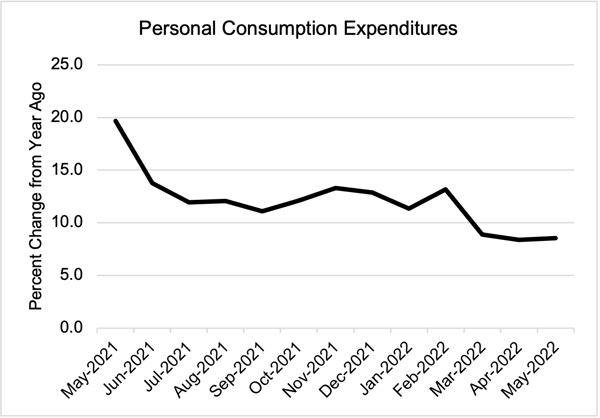 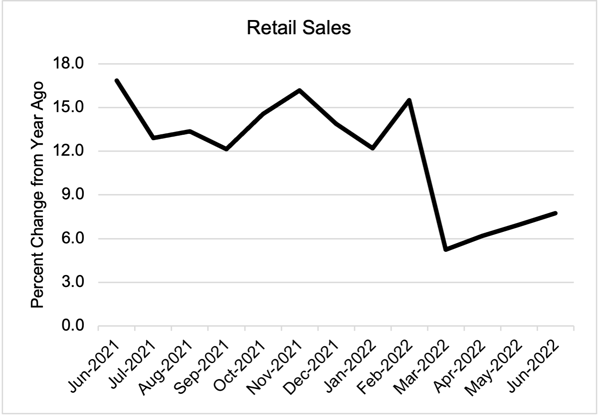 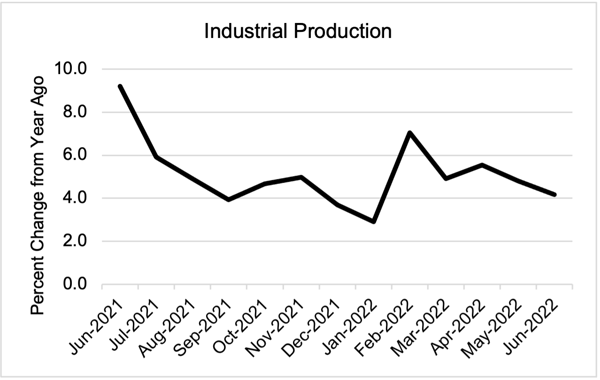 Source: Board of Governors of the Federal Reserve System

As shown in the charts above, while many indicators continue to show growth, that growth has slowed in recent months. Historically high levels of inflation in the Consumer Price Index (CPI), which reached a year-over-year 9.1% during the month of June, caused the purchasing power of incomes to decline.[4] Aside from rising price levels, the consecutive quarterly declines in GDP serve as an additional signal of slowing economic activity. Federal Reserve Board Chairman Jerome Powell and his colleagues have responded to the increasingly high price levels by raising their target for the federal funds rate by three-quarters of a percentage point at both their June and July policy meetings. In doing so, the Federal Reserve hopes to influence higher interest rates throughout the economy, which in turn would theoretically slow demand and spending and ease inflation growth.

When asked about the Board’s future plans, Chairman Powell stated that yet another large interest rate increase is possible at the next meeting in September, but stressed that any decisions were dependent on the economic data released. While Chairman Powell does not believe the American economy is currently in a recession due to the strength of certain economic indicators, it seems the path forward is complicated. In attempting to ease price increases, Chairman Powell noted that the path toward a recovery while avoiding an economic recession has “narrowed.”[5] Such sentiments indicate that the trajectory toward severe price level reductions while simultaneously avoiding a recession may be beyond the reach of the Federal Reserve.

The reality is that determining recessionary periods is not a clear-cut process. Indicators tracked by NBER, along with a host of other economic indicators, are painting a rather murky picture of the current economy. Furthermore, real-time events such as interest rate hikes, geopolitical wars, and supply chain issues take time to affect the overall economy. As a consequence, the trajectory of the economy in the coming months and year is uncertain, and as Chairman Powell said, the path of the Federal Reserve to avoiding a recession has become arduous.[6]