In August 2019, the black or African American unemployment rate fell to 5.4%--the lowest rate since the series was first recorded in 1972. That same month, the overall unemployment rate was 3.7%, or 1.7 percentage points lower. 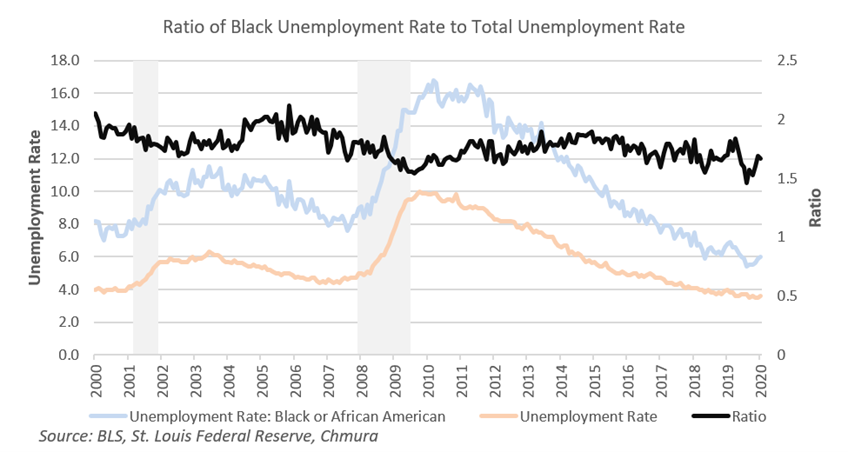 Why is there such a large and consistent difference in unemployment rates? Research is mixed but there are likely several factors at work.

Labor economics theory has established that the fundamental factor affecting labor market access is an individual’s human capital, typically embodied in a person’s education and experiences. Education levels can be used to explain much of the gap between the black and overall unemployment rates.  For example, in 2018, 35% of the U.S. population over 25 years had bachelor’s or higher degree, while this percentage was only 25% for those identified as black alone. Higher education implies higher level of knowledge and skills, making an individual more appealing in the labor market.

Individual’s location matters as well. If a high concentration of black Americans live in states with slower economic growth, even if they perform similarly with other ethnic groups in those labor markets, there will be a gap in the unemployment rate when calculating the national average.[1]

As the longest economic expansion continues, the black unemployment rate has reached a historically low level.  But the challenge still remains to shrink the unemployment gaps between black and other ethnic groups, and to expand opportunities for all.

[1] After accounting for differences in basic economic factors, if there still exists a persistent unemployment gap, we can seek other explanations. See, for example: https://www.federalreserve.gov/econres/feds/files/2017071pap.pdf