Commercial air travel across the nation has increased by over 124 million passengers from 2012 through 2017,[1] but some regions are benefitting more than others. The Los Angeles and New York City metro areas have each seen over 11 million more passengers board planes at their airports over the past five years. Following close behind, the Chicago, Dallas, San Francisco, Seattle, and Miami markets have also added more than 5 million air passengers from 2012 through 2017. The following map highlights these changes, with labels for all metro areas that gained over 2.5 million additional airplane passengers. 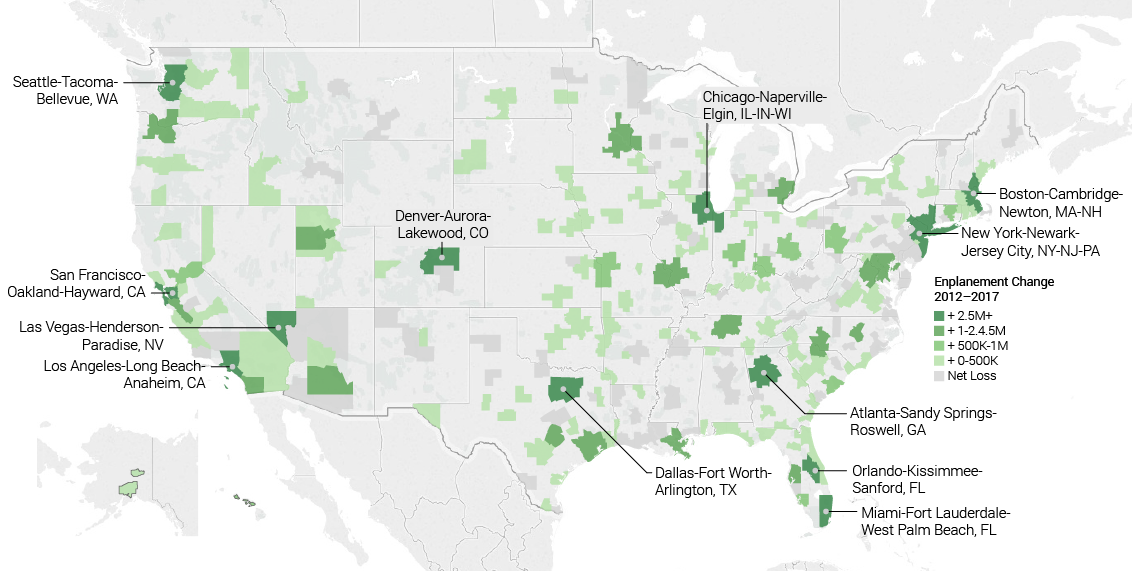 While the gains in passengers are, unsurprisingly, predominantly at the nation’s largest airports, popular tourist destinations such as Las Vegas and Orlando also appear. When the air travel data are adjusted for the population of each metro area, we see which additional popular tourist destinations saw increases in air travel over the past five years. Smaller metro areas that have recently gained popularity in tourism appear, such as Kahului, Hawaii (+2.68 passengers per capita); New Orleans, Louisiana (+1.22); Nashville, Tennessee (+0.85); Portland, Oregon (+0.72); Austin, Texas (+0.71); and Charleston, South Carolina (+0.67).

Increased commercial air travel coincides with increased employment in travel industries. Hotels, car rental companies, restaurants, and other retail and transportation businesses reap the rewards of more air travel. By looking at locations of job postings, we can see what areas in the nation are hiring, likely in anticipation of increased travel and tourism to the area.

The following table shows the top 12 regions with job postings for hotel, motel, and resort clerks over the past 90 days. Texas, in particular, is expanding in the hotel industry as four of the top 12 regions are within the Lone Star State. As most of the top regions seeking hotel clerks have also experienced some of the largest increases in air travel, these areas are poised for continued growth in the travel industries.