With the millennial generation entering the labor force, there is much talk that this new generation of workers is more mobile and will work for dozens of companies over their careers. Some observers also say that American workers, in general, are not loyal to the firms that hire them.

Are those claims supported by facts, or are they just fueled by anecdotal stories from Silicon Valley or other high-tech hotspots where young tech workers jump from job to job for ever-growing pay packages or stock options?  A Bureau of Labor Statistics (BLS) report provides some answers to that question.

BLS also reported that the median employee tenure for 2016 was down from 2014, which was 4.6 years. This decline suggests that the average worker stayed with their employers for a shorter time. Is this the evidence that employees are becoming more fickle and less loyal?

From a historic perspective, this decline is not unexpected. It represents employee tenure reversing to its historic norm. It does not signal a fundamental change in employee loyalty.

While employee tenure declined in 2016, it was not low by historic standards. As shown in the following chart that goes back 20 years, employee tenure was the lowest in 2000 (it dropped to 3.5 years) when millennials were still in elementary school. In fact, the median employee tenure was below 4.0 years throughout the second half of the 1990s and the first half of 2000s.

We cannot attribute the recent decline in employee tenure as evidence that today’s workers are less loyal. If that is the case, why was employee tenure even lower at the turn of the century? 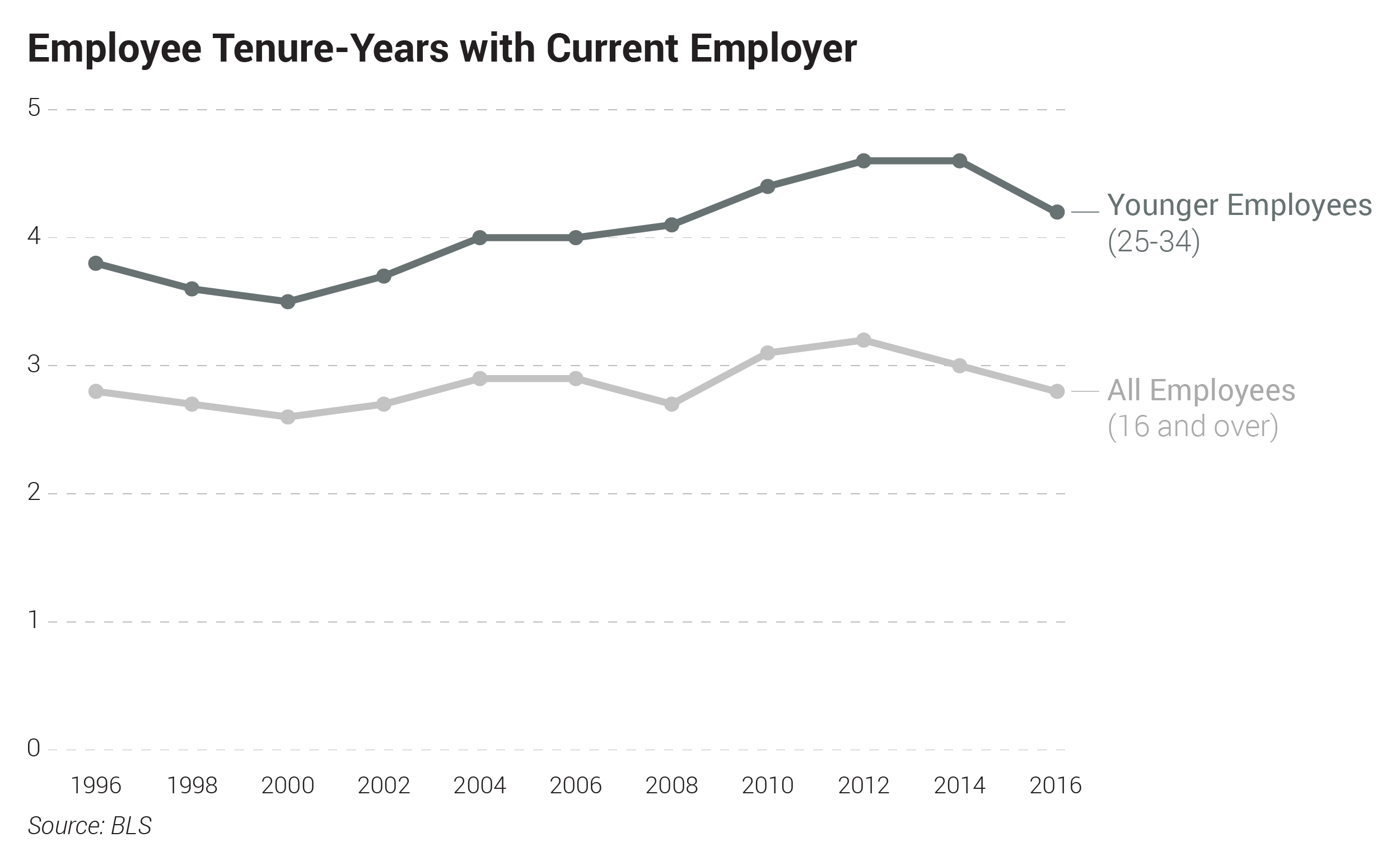 Facing high unemployment and limited job opportunities, it is not surprising that American workers held onto their jobs and were reluctant to change. The slow economic recovery reinforced the perception that the job market remained weak and people continued to safeguard their jobs well into the recovery.

The pace of job creation picked up in the last couple of years and we are now in the 8th year of continuous economic expansion.  As expected, employee tenure declines as workers become more optimistic about the job market and are not afraid of leaving their employers to pursue other opportunities.

The news stories of young millennials job-hopping may well be true, but that might be just for high-tech industries with fast-paced innovations and ever-present new opportunities. Tech-jobs are growing rapidly, but they still account for only a fraction of the American labor force. Many millennials will be working at retail shops, healthcare facilities, manufacturing plants, banks, or business offices. Changes in those industries can be modest and workers may settle in their careers for a long period of time.  Job-hopping can also occur in the regions where rapid growths occur.

There is little evidence that American workers are more fickle. Instead, the driving force for employee tenure is more likely to be the fundamental economic conditions of the country, a region, or an industry.