Federal Budget Cuts Could Hamper Growth in Some Metro Areas

The table below the map shows DoD contract spending in the top 100 MSAs and updates each time a new fiscal year is selected.

To learn more about Chmura’s expertise and research regarding defense spending and supply chain mapping, contact us here.

Just as the fortunes of businesses dependent on federal spending ebb and flow with federal budgets, so do the budgets of the metropolitan statistical areas (MSAs) where those employers are concentrated.

Although non-defense contract spending has supported economic growth in many MSAs over the past decade, contract spending by federal agencies besides the Department of Defense will decline when budget reform becomes a priority. When that happens, MSAs whose budgets are more dependent on that spending may experience shortfalls.

In the fiscal year (FY) that ended on September 30, 2015,[1] federal contracts decreased by $5 billion or 1.2%. Sixty-four percent of the purchases made in the most recent fiscal year were driven by the Defense Department.[2] While the majority of federal contract awards support the Defense Department, numerous other federal agencies enter contracts to purchase goods and services. 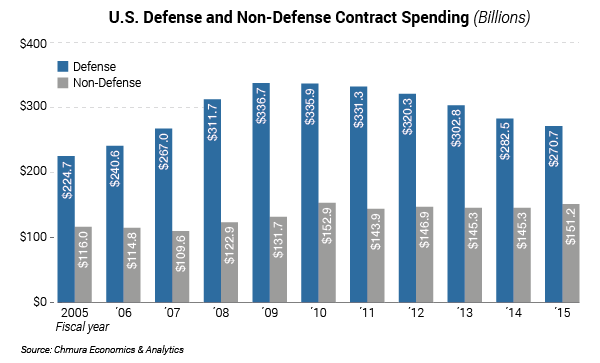 On a per-capita basis, non-DoD contract spending increased $3,214 from FY 2005 to 2015 in the Gulfport-Biloxi-Pascagoula MSA. This region is home to the John C. Stennis Space Center, a NASA rocket testing facility. Contractors including Computer Sciences Corporation and HP Enterprise Services perform work at Stennis Space Center.

From FY 2005 to 2015, non-DoD contract spending in the East Stroudsburg, Pennsylvania MSA rose $3,118 on a per capita basis. Global pharmaceutical company Sanofi Pasteur received large contracts from the Department of Health and Human Services to produce vaccines in its Swiftwater, Pennsylvania manufacturing facility.

[1] The U.S. federal government’s fiscal year begins on October 1 of the previous calendar year and ends on September 30.

[2] Based on Chmura’s FedSpendTOP data that are derived from USASpending.gov data but provide a more accurate picture of federal spending based on the time and place of performance when compared with published federal awards data. The data are adjusted for the length of the contract as well as for an associated subcontract’s place of performance (i.e., regional spending is based on place of performance with out-of-region awards subcontracted into the area added in and in region awards subcontracted out of the region subtracted out); FedSpendTOP data also include purchases by non-DoD agencies which end up in DoD products and have been corrected for errors identified during Chmura’s quality control process.