In the first quarter of 2013, many establishments that provide home care for the elderly were reclassified from NAICS 814110 (private households) to 624120 (services for the elderly). This reclassification, while appropriate according to the BLS, may cause problems for anyone analyzing the health care industry, especially in the regions that were most affected.

Nationwide, this reclassification greatly contributed to the large jump in health care and social assistance (NAICS 62) employment over the quarter, from a post-recession average year-over-year growth rate of 1.7% to 4.3% growth in the first quarter of 2013. The effect is even more pronounced in sub-industries of health care, as illustrated in the table below. 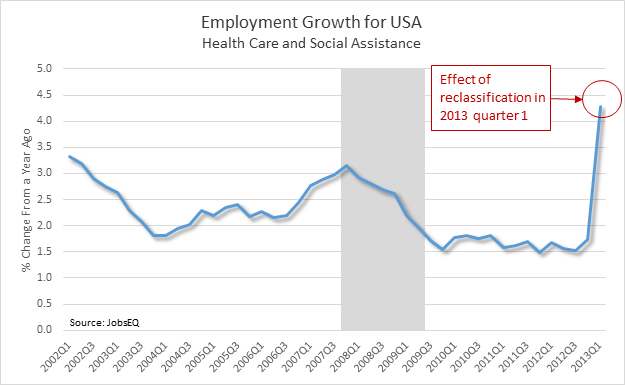 Individual states most affected by this reclassification are California, Massachusetts, Missouri, Nebraska, and Washington, with California and Washington as the top two. California recorded 21.4% growth in the health care and social assistance sector; Washington recorded 11.5% growth. The map below illustrates the regions with the largest percentage change in employment in the health care sector for the first quarter of 2013. 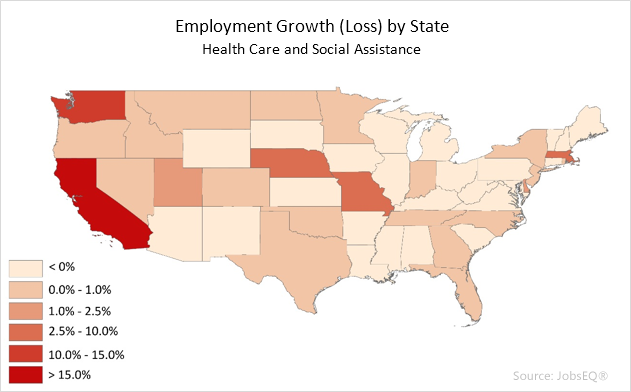 This change also has a corresponding deflationary effect in the “other services” sector (NAICS 81). Nationally, year-over-year employment growth in that sector went from a positive 3.4% in the fourth quarter of 2012 to a negative 8.5% in the first quarter of 2013. There is a similar magnification of the effect in sub-industries of other services as well. Again, California and Washington experienced the greatest percentage change in this sector, with Massachusetts, Missouri, and Nebraska rounding out the top five. California recorded 41.4% loss and Washington 35.3% loss. 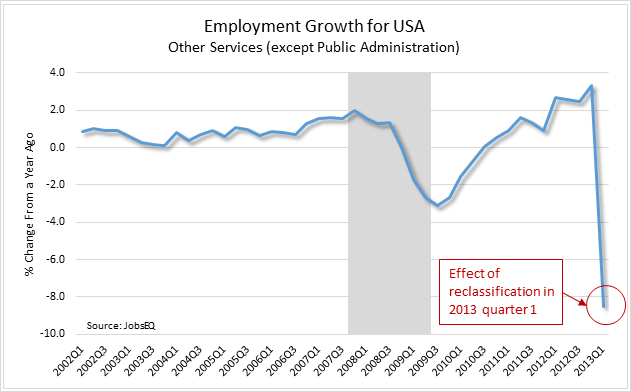 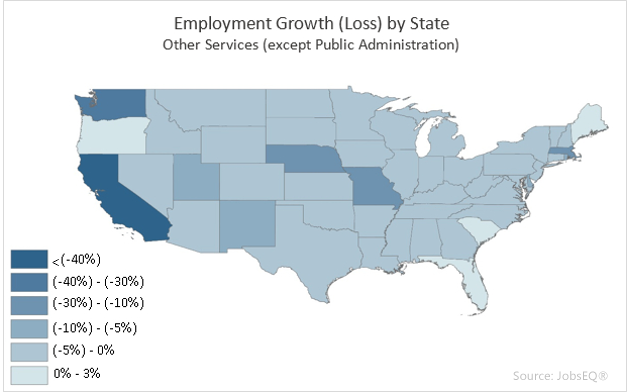 The BLS published a note on their Business Employment Dynamics (BED) website regarding the change:

First quarter 2013 data were affected by an administrative change to the count of establishments in the education and health services industry. A review of the administrative data from which the BED data are derived revealed that certain establishments that provide non-medical, home-based services for the elderly and persons with disabilities had been misclassified in the private households industry (NAICS 814110)…. These establishments are now…classified in services for the elderly and persons with disabilities (NAICS 624120.) This non-economic industry code change artificially inflates the data for gross job gains, openings, births, and the net employment change for the following data series: national total private, state total private, the education and health services sector, and firm size class.

The note makes it clear that the change is a result of a misclassification in prior periods, rather than a fundamental change in the industry. That does not diminish the inflationary effect for the first quarter of 2013, however, and this effect is important to take into consideration when performing any analysis on employment in the health care or other services industries.

Another important change in the first quarter of 2013 is that to the funds, trusts, and other financial vehicles sub-sector (NAICS 525). This is a sector that should typically have little to no employment, according to the census definition:

… These entities earn interest, dividends, and other property income, but have little or no employment and no revenue from the sale of services.

The adjustment that occurred in this period reassigned many employees from these types of funds to other, more appropriate industries in the finance sector. Typically, employees who manage financial vehicles of these types are recorded as part of the other financial investment activities industry group (NAICS 5239). Much of the employment loss from the funds, trusts, and other financial vehicles sub-industry was moved to that industry in this quarter, but some also went to other industries in the finance sector (NAICS 52), depending on firm and region. 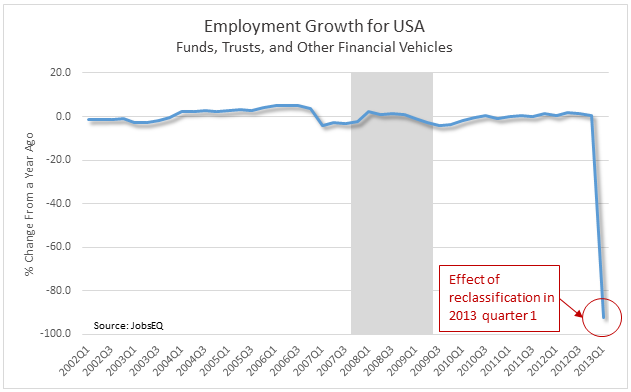 The nationwide adjustment in the first quarter of 2013 caused a reduction in employment in the funds, trusts, and other financial vehicles sub-industry in the majority of regions in the United States. The reduction varies, however, depending on the level of employment prior to the adjustment. Connecticut, Nevada, and Virginia all recorded more than 98% employment loss in this sub-industry. In Virginia, 88% of employment affected by this change moved from other insurance funds (NAICS 525190) to direct property and casualty insurance carriers (NAICS 524126). Other states experienced other movements, depending on the employment landscape prior to the reclassification. See the map below for more information on how individual states were affected.

Again, this is an adjustment in reporting practice, not a fundamental change in the classification of the industry. However, as with the changes to the health care and other services sectors, the deflationary effect of reclassifying a large percentage of employees of the sub-sector must be taken into consideration when performing any analysis of the finance sector.