No Compromising on Higher Education: The Latest Evidence from Job Ads

In 2021, tightness gripped the U.S. labor market. Partially due to ripple effects from the pandemic, the rate of quits reached record highs and many potential labor force participants stayed on the sidelines.

In response to this tighter labor supply, as evidenced by job ads data, employers increased wages and expanded the practice of offering sign-on bonuses. In 2021, however, employers largely held the line when it came to education requirements. 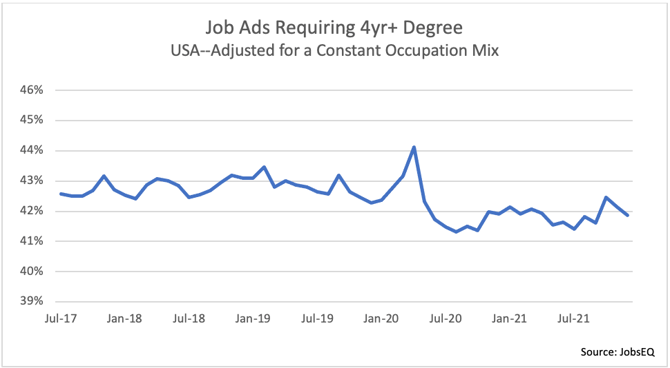 Tracking the education requirements found in job ads for detailed occupations and looking at those trends in aggregate, we see fewer requirements for a bachelor's degree or higher last year compared with several years earlier. For example, in December 2021, 41.9% of ads required a four-year degree or higher compared with 42.6% in July 2017.[1] Regardless, this change does not appear to be a gradual, ongoing trend, but largely was a one-time shift that transpired in 2020.

The year 2020 was volatile for hiring due to the COVID lockdowns. Job ads reflected this as employers radically altered hiring plans, especially during the second quarter.

Even though labor market tightness was prominent in 2021, the data do not show a clear, overall slackening in education requirements in response, at least within that year. The data do show, however, that lower requirements that took hold in 2020 continued in 2021.

At more detailed occupation levels, the data indicate a variety of changes in advertised educational requirements, but in both directions. 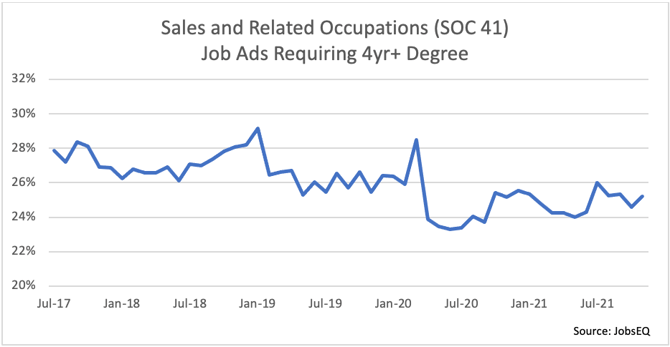 At the occupation level, education requirement trends are mixed. The two charts above illustrate contrasting examples at the major occupation group level. Sales positions, overall, have seen a decline in job ads where a four-year degree or higher is an explicit requirement. Over the same period, ads for business and financial operations have exhibited a generally rising trend in education requirements.

In other examples, for computer and mathematical occupations as well as for healthcare practitioners and technical occupations, there has been just a slight overall decline in higher education requirements in job ads over the past several years. Among management occupations, meanwhile, requirements for four-year degrees or higher has been, overall, essentially flat.

Though data at a more granular level tends to be more volatile, more substantial changes can be found among detailed occupations. For example, nannies saw requirements for a four-year degree or higher drop from around an average of 20% of ads in 2020 to 13% in 2021. Exercise trainers and group fitness instructors also saw a drop for this education level, from 37% to 29%. In contrast, job ad requirements for a four-year degree or higher rose for food service managers from 17% to 24% from 2020 to 2021, and public relations specialists saw an increase from 71% to 82% over the same period.

All job postings data above are derived from JobsEQ, the Real-Time Intelligence online job ad data set, pulled from over 40,000 websites and updated daily. Many extraneous factors can affect short-term volume of online job postings, though short-term snapshots can offer early indications of labor market shifts. Historical volume is revised as additional data are made available and processed. Each month of ads is defined as new online ads that first appeared in that month. All ad counts represent deduplicated figures. The relationship between ad counts and actual hires is described here.

The calculations for percentage of job ads with a specific educational attainment requirement are performed only among ads where an educational requirement is provided. Close to half of all job ads do not explicitly provide an educational requirement. This characteristic can potentially loom large in any trend analysis like the above. However, we tested the characteristics of the set of jobs where education requirements are not provided (i.e. the requirement is “unspecified”). We found that the incidents of a bachelor’s degree or higher requirement was very similar but only slightly higher than expected in the unspecified group versus those where it was specified.[2] This difference and its impact was small enough to be ignorable for the analysis presented here.

Research assistance for this blog was provided by Jessica Ziegler.

[1] These data are adjusted for the changing mix of occupations over time. Due to seasonal hiring and year-to-year differences, the mix of occupations within job ads can vary, but changes in requirements due to this variation in occupation mix were removed from the trends shown here. If we look at the overall education requirements without adjusting for the occupation mix changes, the monthly time series is more volatile, but also the long-term slight shift in requirements becomes even slighter. In the unadjusted data, 42.1% of ads in 2018 required a four-year degree or higher compared to 42.3% in 2021.

[2] Within a sample of 52,444 ads, 42.7% were estimated to have a requirement of a four-year degree or higher compared to an expected value of 41.2%. To compare the requirements in unspecified ads versus those where they were specified, we first identified pairs of ads from the same employer, with the same job title, for the same 8-digit (SOC) occupation, for the same county, the same month, and from the same web source. A further restriction on these pairs of ads was that one of the ads would have an educational requirement listed and the other ad would not. For any ad in this set of ads without an education requirement listed, we estimated that its actual educational requirement was the same as found in its pair. The expected value was found by looking at all ads in the same county for the same occupation and in the same month and noting the average educational attainment there. The difference between estimated and expected values overall was statistically significant, though a fairly small 1.5 percentage points. Such a small difference would only impact overall educational attainment requirement trends if the relative number of ads with requirements unspecified changed substantially over time—which is atypical.