New job ad volume remained relatively high in the third quarter of 2021, though employers have been faced with a record high number of quits. Sign-on bonuses have increased in popularity, a signal of tightness in the labor market. 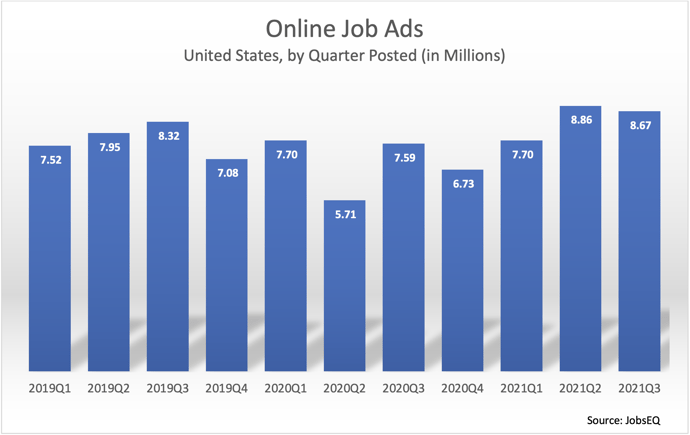 New online job ad volume in 2021 decreased in the third quarter to 8.67 million ads, down from a peak of 8.86 million new ads in the second quarter. New job ad volume was slower in 2020 after the COVID lockdowns were put into place. High job ad volume in 2021 represents, to a degree at least, the economy attempting to rebound with quicker than average employment growth. However, employers in 2021 have been faced with a higher-than-average quits rate, thus needing to hire to backfill existing positions as well. 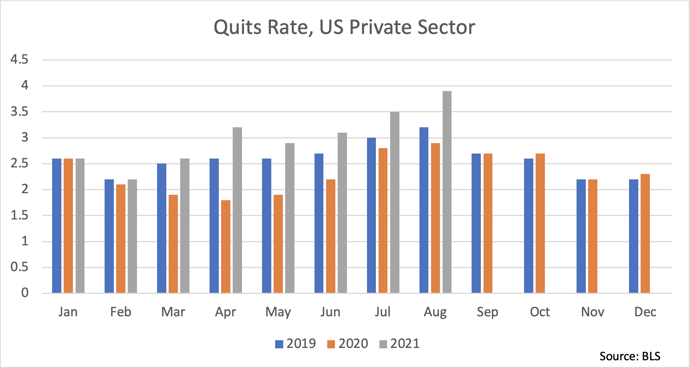 As typically happens during a recession, the rate of quits in the nation notably slowed in 2020 during the uncertain labor market environment of the COVID lockdown. [1] This is shown in the orange bars above (especially March through August) exhibiting lower quits in the private sector compared to the prior year (2019, shown in blue). In 2021, however, the rate of quits have soared to record levels (shown in the gray bars above). The quits rates in July and August of 2021 were higher than at any point in the past twenty years. The rate of quits has been especially high in the retail sector (a preliminary measure of 5.6% in August) and in leisure and hospitality (7.7% in August, in the preliminary estimate). 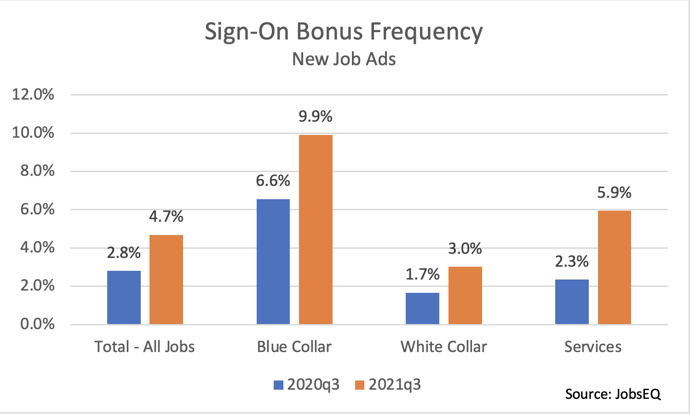 The practice of offering sign-on bonuses, which is a sign of a tight labor market, has increased over the past year. In the third quarter of 2021, 4.7% of all job ads included the offer of a sign-on bonus, a substantial increase from 2.8% one year earlier. Sign-on bonuses have been and continue to be more popular among blue-collar occupations such as truck drivers. This benefit, however, has seen fast growth rates among some service and white-collar jobs. Among service occupations, for example, the number of ads including sign-on bonuses for retail salespersons increased over sevenfold in 2021Q3 compared to a year earlier; fast food and counter workers saw a similar increase over the same period. Among white-collar workers, sign-on bonuses are most popular in the healthcare practitioners and technical group, found in 9.3% of ads in 2021Q3. Though these bonuses are much less frequent in other white-collar groups, there has been growth there as well—for example, 1.3% of ads for management occupations included a sign-on bonus in 2021Q3, up from 0.7% a year earlier. 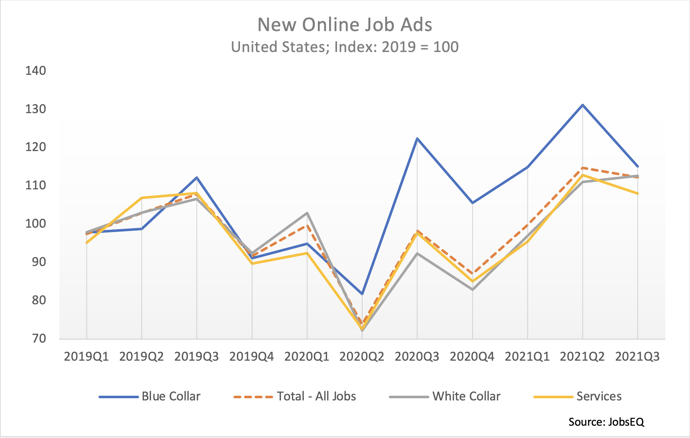 Since the COVID downturn in the second quarter of 2020, new ads for blue-collar positions fared better in comparison to ad volume for white-collar and service jobs. This was partially driven by changes in the retail sector and the demand for warehousing and transportation-related occupations. In the third quarter of 2021, however, the disparity between these groups closed substantially.

From the second to the third quarter, the decline among blue-collar jobs was largely driven by a 14% drop in new ads for transportation and material moving occupations. New ads for stockers and order fillers, for example, fell from nearly 267,000 ads in the second quarter to 249,000 in the third. Likewise, demand for driver/sales workers slowed with 68,800 ads in the third quarter, down from 73,900 in the prior quarter.

In contrast, white-collar job ads grew with a 7% expansion among healthcare practitioners and technical occupations and 8% growth in the business and financial operations group. In healthcare, the physical therapist occupation was hit especially hard during the lockdowns with new ads falling to just 11,000 in the second quarter of 2020. Volume has rebounded, though, with new ads for physical therapists eclipsing 25,000 in both the second and third quarters of 2021. New ads for software developers bottomed out in 2020Q4 at 139,000, but have grown steadily since, nearly reaching 198,000 in 2021Q3.

Among service occupations, demand for childcare workers plummeted at the beginning of the lockdown to fewer than 5,000 new ads in 2020Q2. Demand for childcare workers picked up with about 16,500 new ads in 2021Q3, though still fewer than the 24,700 new ads two years earlier in 2019Q3. Food service ads rebounded in the second quarter of 2021, but pulled back somewhat in the third quarter. For example, new ads for first-line supervisors of food preparation and serving workers peaked at over 125,000 in the second quarter before slipping down to 113,000 in the third.

Many extraneous factors can affect short-term volume of online job postings. Thus, while the changes noted above should be watched over time to confirm the impacts, short-term snapshots can offer early indications of labor market shifts.

Sign-on bonus offers in the ads data cited above were identified via the presence of one of several keyword phrases: “sign-on bonus,” “hiring bonus,” “starting bonus,” or “signing bonus.” If sign-on bonuses were indicated in the job ads with some other verbiage, or were not indicated at all, any presence of these bonuses for those jobs are not captured in the data above.

[1] The National Bureau of Economic Research, the official arbiter of recessions in the United States, declared that the nation was in recession during the first two quarters of 2020.