What is Happening to Women in the Labor Force?

Posted on April 1, 2021 by Melissa Pritchard

When Women Enter the Workforce, the Economy Grows

The increasing participation rate of women in the labor force in the 20th century greatly contributed to national economic growth, as well as significantly impacted the lives of women in the United States. During the COVID-19 pandemic, however, women are losing a disproportionate number of jobs, due to occupational distribution and the need for childcare during remote learning. In the context of broader labor force participation trends, the pandemic’s impact on female workers could have ramifications for the national recovery. Historically, gaps in labor force participation make it more difficult for workers to re-enter the labor force if their skills fall behind.

One of the greatest economic changes in the United States in the last century is the dramatic increase of women participating in the labor force. The economic growth after the Second World War created a greater demand for labor and provided an opportunity for women to permanently enter the workforce, as opposed to temporary work they found during the war. For women, accelerated enrollment in higher education, the women’s rights movement, and legislation such as the 1964 Civil Rights Act which created the Equal Employment Opportunity Commission, contributed greatly to women seeking work outside of the home in much greater numbers than in previous generations.[1]

In 1950, the women’s participation rate, or the percentage of women aged 16 or older who are either working or searching for a job, was 33.9%. However, as the baby boomer generation, born between 1950 and 1964, entered the workforce, women began to enter the workforce at a rate much higher than ever seen before in the United States.[2] By 1970, women’s labor force participation rate had grown to 43%. By 1980, it had jumped to 52%, and by 1990 it reached 58%.[3] The rate peaked in 1999 at 60% and has been in slight decline ever since, driven by increasing enrollment in college—in 2017, 57% of all students at postsecondary institutions were women. The women’s labor force participation rate is projected to decline to 55.8% by 2024.[4]

The growth of women in the labor force throughout the 20th century and the continuing participation of women in the 21st century has greatly contributed to the nation’s economy and growth. Theory suggests that as workforce size and productivity increase, wages will also increase. In the United States, studies have found that for every 10% increase in women’s labor force participation in a metropolitan area, there is a corresponding 5% increase in median real wages for both men and women.[5] According to a 2013 Council of Economic Researchers study, if the participation of women in the labor force had remained at the 43% it had risen to in 1970, the current economy would have been 13.5% smaller.[6]

However, in the COVID-19 pandemic, women in the services sector have been laid off at a rate of 1.4 times greater than that of men since layoffs began.[7] In March and April 2020, women represented 58.7% of job losses in the service producing sector. The unemployment rate for women over the age of 16 increased from 3.4% in February 2020 to 16.2% just two months later in April, 2.7 percentage points higher than the unemployment rate for men aged 16 or older (13.5%).[8] Contributing factors include higher female participation rates in certain fields, and greater participation in part-time work.

Women are more likely to be employed in certain fields than men, notably service-related fields, and are also more likely to work part-time. In 2015, 29.4% of employed women worked part-time, compared to only 15.8% of men. While many of these women work part time by choice, approximately 20% stated that they had either had their hours reduced or had been unable to find full time work. Factors for those who chose to work part-time included the high costs of childcare, as well as children’s school hours.[9] These issues have been exacerbated during the COVID-19 pandemic.

The labor force participation rate for women aged 25-54 reached 77% in February 2020, but fell to 73.6% by April, which demonstrates that many women have exited the labor force and are not looking for a job, possibly until the pandemic is over.[10] These losses can be attributed to women’s jobs being more highly concentrated in sectors that have experienced job loss due to the pandemic. A study by the Kansas City Federal Reserve Bank found that 82% of initial job losses were concentrated in three industries: leisure and hospitality, education and health services, and retail trade. Of the 56.5 million jobs in these sectors, women held 62.7%.[11] The Richmond Federal Reserve Bank found that in retail trade, while women held 49.6% of jobs in that industry, they held 61.2% of the jobs that had been lost. For education and health services, women made up 77.3% of jobs and 83.3% of the losses.[12] The study found a similar but less pronounced pattern in accommodation and food services (accounting for more than 80% of jobs in leisure and hospitality), where women held 53% of jobs. 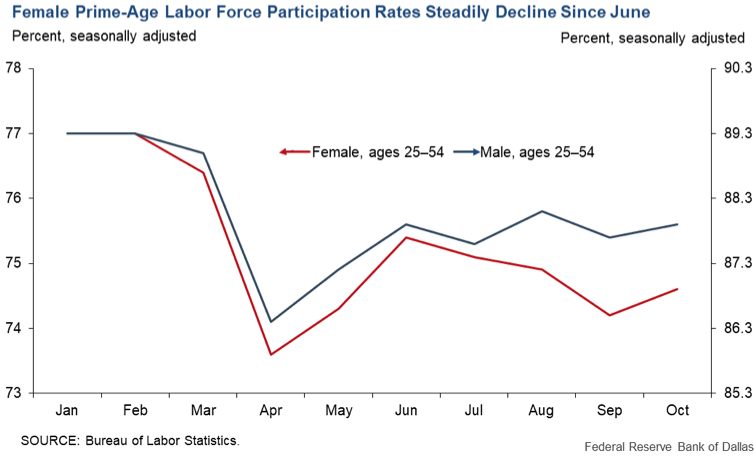 For Women, the COVID Recovery is Slow

Following these initial losses, women’s labor force participation has stagnated during the pandemic. The chart above shows that women’s participation rate was on a recovery path during the summer months but declined in September (coinciding with the start of the school year in most places) and has not been recovering at the same speed as men’s participation. The timing of this decline suggests that remote learning and responsibility for childcare are also contributing to the declines in women’s labor force participation.[13] In December 2020, women saw a net loss of 156,000 jobs for the month, while men saw a net gain of 16,000 jobs.[14] However, in February 2021, women saw a gain of 245,000 jobs, or 64.6% of net job gain for the month. In February 2021, the women’s labor force participation rate recovered to 55.8%, higher than the low in April 2020 at 54.6%, but still lower than August 2020’s 56.2% and the pre-pandemic level of 57.8% in February 2020.[15] Nevertheless, the net job loss for women during the pandemic is still more than men’s net job loss, and from February 2020 to March 2021, women account for 53.5% of net jobs lost, or a net loss of 5.1 million jobs.[16]

There is considerable speculation about whether these jobs losses will be temporary or permanent, with implications for economic recovery and expansion. How may societal norms, such as gender responsibility for child or elderly care, impact the reentry of women into the labor force as the economy reopens? How many women have exited as permanent “homemakers,” and how many would be willing to work, but will find trouble re-entering the workforce after a substantial break? We will be watching these data with interest as the country reopens, as it is clear the reentry of women into the workforce will be essential for economic recovery following the pandemic, just as women’s contributions spurred growth in the 20th century.