Vaccine Mandates Appear to Have No Effect on Quit Rate

As the percentage of workers quitting their jobs rises to new highs, employer vaccine requirements have been suggested as a potential cause. Data suggest, however, that vaccine mandates had limited effect on overall state quit rates after they were enacted.

To limit cases and spread of the COVID-19 virus in 2021, 24 states required at least some workers to get the vaccine or be tested weekly to maintain employment. Another 24 states passed legislation that prohibits any such vaccine mandate. Three states landed in the middle, not introducing a vaccine mandate but also not prohibiting one, just recommending vaccinations. The state policies are summarized in the map below.[1] 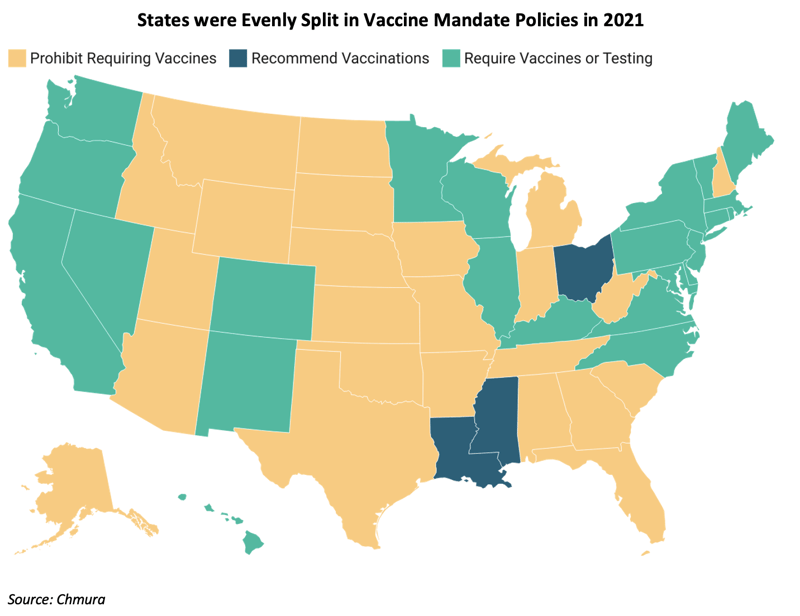 Vaccine mandates were announced and took effect largely in September and October 2021. At the time, 37% of workers in a survey said they would quit their jobs if their employer required that they get a COVID-19 vaccine or be tested weekly. That number increased to 72% if they were not offered the weekly testing option, according to the Kaiser Family Foundation (KFF) Covid-19 Vaccine Monitor.[2] Those surveys suggest vaccine mandates would lead to a large number of quits. Even so, it is easy to say you would quit hypothetically and much more difficult to face the reality of actually giving up a job.[3] Chmura utilized the U.S. Bureau of Labor Statistics (BLS) Job Openings and Labor Turnover Survey (JOLTS) data to evaluate this claim.

States are separated according to policies in effect at the end of 2021, but these policies were not all implemented at the same time. In August, some states had announced mandates, with policies for state employees and healthcare workers taking effect in California and Nevada, and for state employees in Hawaii. Another nine states and the District of Columbia had policies take effect in September, again primarily affecting state employees, healthcare workers, education workers, and employees at nursing homes. Finally, ten states had mandates take effect in October. Twenty-four states created laws or executive orders over this period which prohibit vaccine requirements, while three states only recommended vaccines. In August, the average quit rate in states which would announce vaccine mandates was 2.0%, compared with 2.5% in states which would prohibit vaccine mandates, and 2.8% in states which would only recommend vaccinations.

By September, workers in states with prohibitions against vaccine requirements quit at a rate of 3.3%, while workers in states with these mandates were quitting at a slower rate of 3.1%, on average. Hawaii is an outlier in these data, with quits rising to 6.6% in September, from 3.3% in August. The high quits rate in September could be related to a delayed response to vaccine policies which had taken effect the previous month, and state and local government employment declined 1.3% in Hawaii between August and September 2021, but there are also many other factors at play. Excluding Hawaii, the average quits rate for states with a vaccine or testing requirement was 2.9%. States which only recommended vaccinations saw an average quits rate of 3.5%.

In October, vaccine and testing policies were in effect for 23 states and the District of Columbia, but the quits pattern remained the same. Workers in states with these policies quit at an average rate of 2.8%, compared with an average rate of 3.1% for states prohibiting vaccine requirements and an average 3.2% rate in states which just recommended vaccinations. Hawaii’s quits rate fell back in line with the group average, at 2.9% in October. These data are summarized in the figure below. 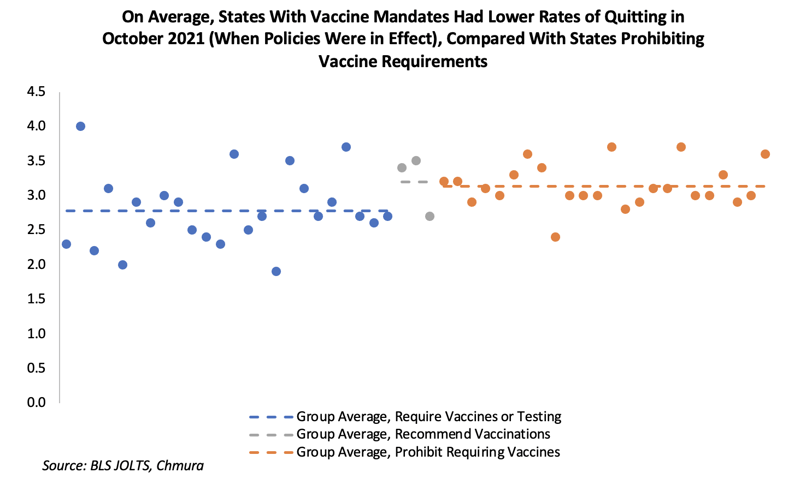 Lower quit rates in these states are not outside of their historical patterns. As shown in the figure below, states which required vaccine mandates have typically had lower rates of workers quitting than states which recommended vaccines or prohibit vaccine requirements. It is important to note, however, that there is no shift in this pattern as vaccine and testing requirements went into effect in fall 2021; in other words, based on quits rate data there is no evidence that mandates increased quits in these states over this period.

The data reviewed here do not establish a causal relationship. At best, there are minimal negative effects of vaccine mandates on the rate of workers quitting their jobs during a surge of COVID-19 infections. There are multiple explanations for these results. It may be inferred that though some workers may quit rather than be vaccinated, more workers—particularly in industries with a higher risk of exposure—may be encouraged to stay by such protective measures. In addition, people responding to the survey might have overemphasized their opposition since it was a hypothetical rather than imminent issue. Finally, the quits rate increases when workers have confidence in the labor market. The states without mandates tended to be more open, so workers may have had more employment opportunities and therefore may have been more likely to quit. 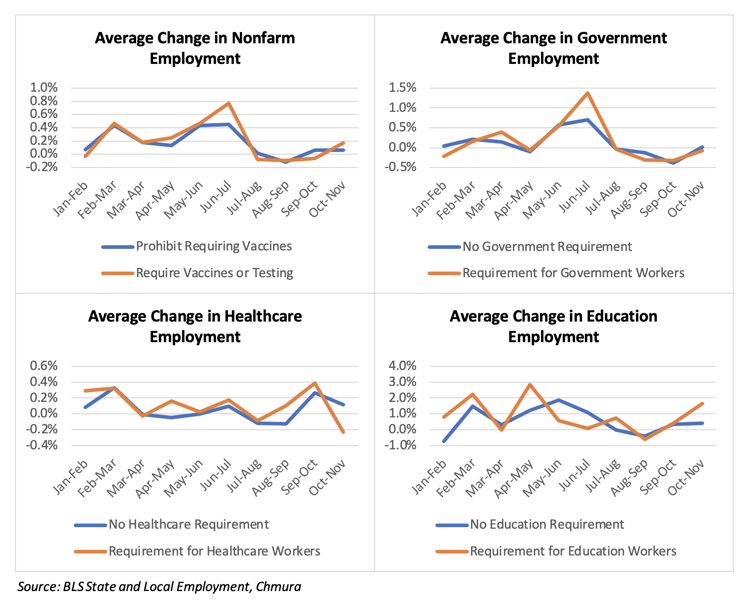 [3] Unfortunately, the survey did not pose a similar question in subsequent months, so there is not data on this question over time. See, for example, the November 2021 survey https://files.kff.org/attachment/TOPLINE-KFF-COVID-19-Vaccine-Monitor-November-2021.pdf