As the urgency to combat climate change increased globally, there has been an effort to change how businesses produce goods and services. This has promoted what is called the “Green Economy.” The prominence of the Green Economy has grown significantly over the past decade as governments around the world have passed new laws and regulations to battle climate change.

Recognizing the growing influence of the Green Economy in the United States, Chmura added two searchable occupation groups in JobsEQ® to capture “green jobs.” This blog is a description of how these groups were defined and how they can be used for analysis.

Our definition of green jobs primarily relies upon a 2011 study published by O*NET titled “Greening of the World of Work: Revisiting Occupational Consequences.”[i] This study used a concept called “occupational greening” which examines how the Green Economy impacts or redefines the duties and responsibilities of occupations—which are defined by SOC codes. Thus, this study used an occupation-centric approach to define green jobs.

However, we acknowledge that there is no one standard method for defining green jobs. In fact, the Bureau of Labor Statistics[ii] has previously used a more industry-focused approach. They measured green jobs as all jobs in establishments that produced green goods and services or used environmentally friendly production processes.

Regardless, while there are multiple approaches to defining green jobs, the approach we used in JobsEQ is occupation-focused.

The O*NET study defined the Green Economy as “economic activity related to reducing the use of fossil fuels, decreasing pollution and greenhouse gas emissions, increasing the efficiency of energy usage, recycling materials, and developing and adopting renewable sources of energy.”

Using this definition, the authors divided the Green Economy into 12 different sectors:[iii]

Within each sector, the impact of the Green Economy on an occupation was measured in one of three ways:

The Process We Used to Incorporate Green Occupations in JobsEQ

Next, it was necessary to crosswalk the 8-digit 2018 SOCs to the 6-digit 2018-hybrid SOCs.[iv] The reason why it was necessary to crosswalk from the 8-digit SOC level to the 6-digit SOC level is because most publicly available occupation data (such as employment and wages) is published at the 6-digit level, including most of the occupation data in JobsEQ. The reason for using 2018-hybrid SOC codes is a temporary situation due to the Occupational Employment Statistics Survey as discussed in greater detail in one our other blogposts.

In JobsEQ, you can find information for the two green jobs occupation groups we added in any occupation-based analytic. The first group is called “Green Jobs – Total” and includes all the jobs identified in the above process. The second group is called “Green Jobs – requiring HS or less” and is a subset of the first group, including only those green jobs which typically do not require more than a high-school education for entry—a group designed especially to help workforce development professionals place job-seekers without a college background in the green economy. 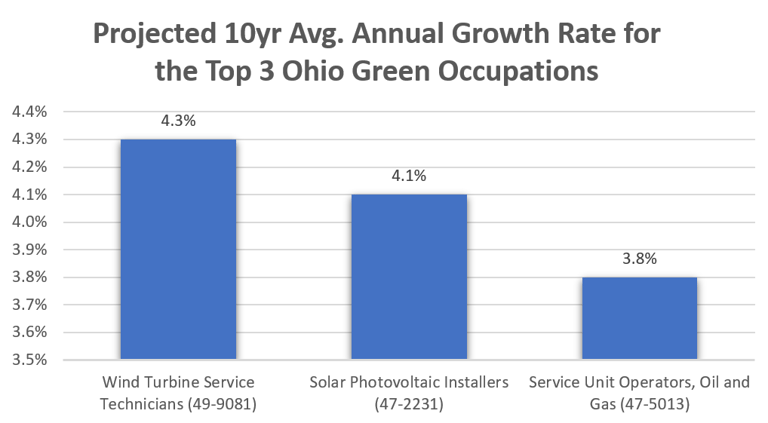 As some example JobsEQ queries, the group of green jobs can be examined for regional growth prospects—the above chart, for example, shows the three green jobs with the fastest expected growth in Ohio. After identifying which green jobs are growing the fastest, you could then use the completions data in JobsEQ to identify whether your region’s talent pipeline can support the growing demand for those occupations—for example, if schools in your region are graduating students with degrees in programs that are associated with wind turbine service technicians or other green jobs.

JobsEQ also houses online profile/resume data, allowing you to view the characteristics of people that are already working in an occupation in your region, such as their educational background and credentials. For example, in Ohio, I can see that the majority of people currently working as wind turbine service technicians do not have a bachelor’s degree listed on their resume.

Next, you could use our RTI data (online job-postings) to understand the regional demand for green jobs in your region. RTI allows you to view real-time jobs postings from employers in your region. Thus, you can see which employers are posting jobs and what skills/credentials they are demanding of applicants and at what wage. In Ohio, the employer who posted the most 2019 job ads for wind turbine service technicians was FieldCore, a subsidiary of General Electric. The same RTI data show for wind turbine service technicians a highly requested applicant requirement was to have experience with generators.

As you can see, there are many tools in JobsEQ that can help you understand the impact of the Green Economy on your region and help prepare your community for the future.

[iii] A detailed definition of each sector can be found on page 11 of “Greening of the World of Work: Revisiting Occupational Consequences.”

[iv] A 6-digit SOC code can be comprised of multiple 8-digit SOCs, and some of the 8-digit components may be identified as green jobs while others are not. We determined that if 20% or more of the 2019 job ads in our RTI Job Posting Database for a 2018 6-digit hybrid SOC had come from 8-digit SOCs identified as green jobs, then that 6-digit SOC would be included in our green job definition. Most of the 6-digit SOCs in the analysis were well above the 20% threshold. To see which SOCs did not pass the 20% hurdle and thus were not included in our JobsEQ green jobs definition, view Slide 40 of “The Greening of the Economy: The Future of Green Jobs” webinar.