How Colleges Can Attract Workers

In 2008, PEW Research published a study[1] investigating the reasons people either remain in or move away from their hometown. The study found that—among characteristics measured such as gender, age, race, and family income—the largest difference between those who moved and those who stayed centered around educational attainment. Among the people surveyed, 77% of the college graduates had moved at least once, compared to only 56% of those without college degrees.

This trend tells an interesting story. Many students who attend college may not return home when they are finished, possibly finding long-term work in the area where they went to school. Therefore, the availability of academic programs in your area can play a key role in bringing in more workers.

So, how might you go about measuring how well your area compares in this respect? One way to assess the strength of your locality’s academic institutions is to look at the number of awards that are being earned per capita. Accessing population and completions data in JobsEQ,[2] we can look at how the postsecondary awards per 1,000 people compare across the four major regions of the United States.[3] 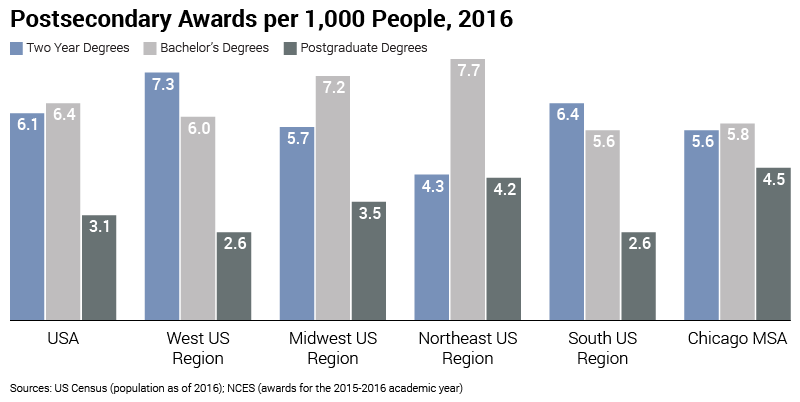 In addition to the four major U.S. regions, we’ve included the awards per capita for the entire United States and for the Chicago-Naperville-Elgin, IL-IN-WI MSA. Across the nation, the two-year[4] degrees and bachelor’s degrees per capita are relatively equal, with the postgraduate degrees being about half as common. In the Midwest and Northeast regions, the bachelor’s and postgraduate degrees tend to skew higher while, in the West and South, the two-year degrees run above average.

Taking Chicago as an example of how one metropolitan area compares, we can see where it may have an advantage and opportunities for improvement. In Chicago, both the two-year degrees and the bachelor’s degrees per capita fall below the national average, but only by a modest amount. Compared to the rest of the Midwest, however, the bachelor’s degrees are significantly lower in Chicago.

On the other hand, the Chicago MSA exceeds all major regions in postgraduate awards per capita. Schools in the Chicago MSA offer 4.5 postgraduate awards per thousand people, compared to the Midwest region’s average of 3.5 and the national average of 3.1. This attribute can translate into an advantage for Chicago, giving the area access to a highly-educated workforce that could be enticed to stay in the area, bringing economic benefits such as higher wages and greater innovation.[5]

[3] For a definition or map of the US Census Regions used in this analysis, visit this webpage: https://www.census.gov/geo/reference/gtc/gtc_census_divreg.html