As Employment Grows, When Will We See Wage Growth?

Wage growth remains relatively flat despite indicators of economic recovery. As the unemployment rate falls and employment grows, the increasingly smaller supply of workers is expected to lead to wage growth. As Loretta Mester, president of the Federal Reserve Bank of Cleveland, put it recently in the Wall Street Journal, “basic economics hasn’t gone out the window […]when employment grows, wages will start to grow.”

Over the past two years, however, most workers have not seen much wage growth. In fact, there is a somewhat weak but negative relationship between employment growth and wage growth for over 800 occupations from 2012 through 2014 (each occupation is weighted by the number of people employed in that occupation in 2014). There are some outliers, including occupations in the arts with an especially wide range of wages (such as models and makeup artists), but the majority of occupations are clumped approximately equally around low employment growth and low wage growth.

Using the Bureau of Labor Statistics’ occupation profiles and typical entry-level education requirements for each occupation, the relationship between employment growth and wage growth from 2012 through 2014 differs depending on the education typically required for an occupation.

Based on a review of the charts by education required, much of the negative relationship for all occupations is being driven by lower-skilled occupations, those that typically require a high school diploma or equivalent or less. Low-skill occupations with employment growth have seen a decline in real wages over this period, while many of the higher paying occupations have seen declining or stagnant employment. This is likely an indication that there is a surplus of available workers at the low-skill level. In fact, unemployment rates for workers without a college degree were well above the national average, as shown in the chart below from the Bureau of Labor Statistics. 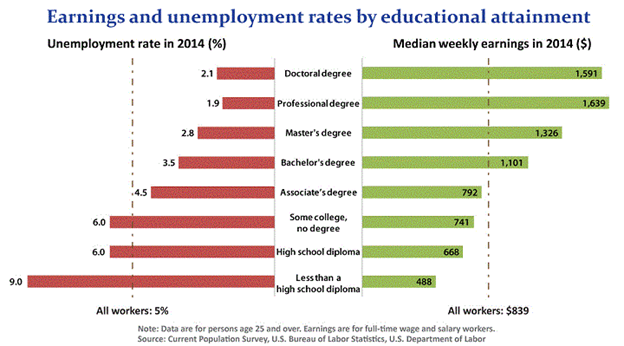 For higher-skilled occupations such as those requiring at least a bachelor’s degree, the expected positive relationship between employment growth and wage growth is evident, indicating that labor market slack for these positions has been eliminated or nearly eliminated. Meanwhile, for middle-skill occupations (typically requiring some college or an associate’s degree) the relationship has been flat, which may suggest a tipping point in the near future as the remaining slack diminishes. Even so, the wage disparity between high and low-skilled jobs has been increasing for decades.

Until the negative or flat relationship between wage growth and employment growth in lower- and middle-skill occupations reverses, we will likely continue to see little real wage growth in the economy at large.