While the U.S. manufacturing sector employed about 1.8 million fewer workers in 2016 compared to ten years prior, many industries within the sector have posted solid to robust job gains.

At the six-digit NAICS[1] code levels, 18 manufacturing industries expanded by at least 8,000 jobs over the last ten years (2006 – 2016). While there is some diversity within these industries, there are several clusters where most of the employment growth has occurred.

Breweries and wineries top the list of manufacturing industries with the largest number of job gains over the last ten years, with 33,185 and 24,785, respectively. These industries plateaued during the Great Recession, not declining like manufacturing overall. Following the recession and its residual effects, wineries and breweries have been growing at a steady rate—and establishment counts of breweries have been expanding nearly exponentially. 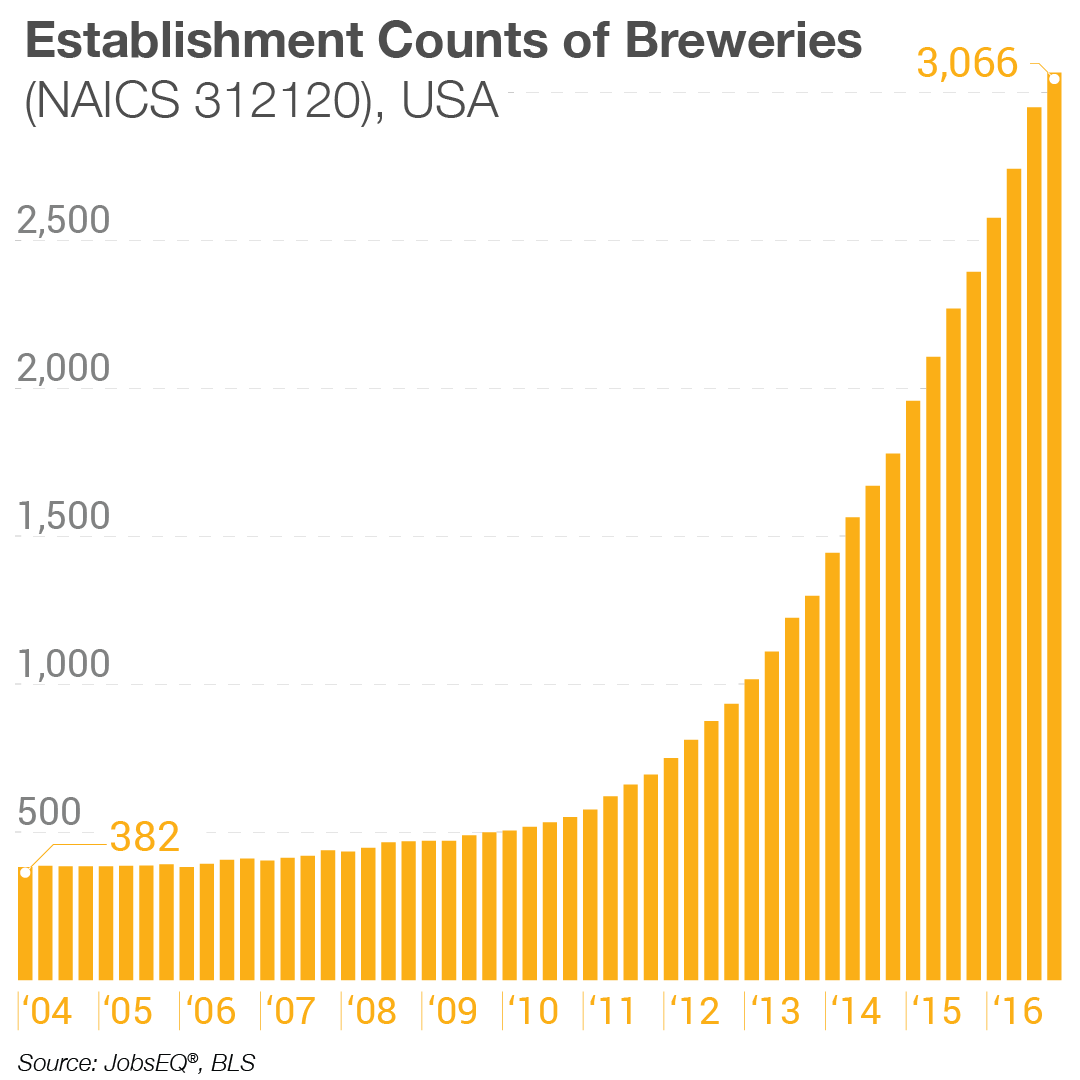 Food and Other Beverage Manufacturing

All food and beverage manufacturing industries[3] combined added 149,716 jobs to the economy over the last decade.

A few other noteworthy industries that contributed significantly to recent manufacturing employment growth include surgical and medical instrument manufacturing and in-vitro diagnostic substance manufacturing, expanding by 12,270 and 9,376 jobs, respectively. Both of these are related to healthcare: the former is a subset of the medical equipment industry and the latter a subset of the pharmaceutical industry.

Other industries rounding out the most significant contributors to manufacturing job growth over the last decade are plastics packaging film and sheet manufacturing, turbine and turbine generator set units manufacturing, commercial screen printing manufacturing, and other major household appliance manufacturing, each expanding by between 8,000 and 9,000 jobs.

[1]NAICS stands for the North American Industrial Classification System. NAICS codes begin at the two-digit level (referred to as “sectors”) and subdivide into industries down to six digits (as shown in the table).

[2] Industry data compiled in JobsEQ are based on covered employment from the QCEW, published by the BLS, with self-employment calculations imputed by Chmura Economics and Analytics.

[3] For the purposes of this piece, “all food and beverage manufacturing industries” is defined as the combination of NAICS codes 311 and 3121.