In the last quarter of 2017, there were over 210,000 private sector establishments[1] in the wholesale trade agents and brokers industry (NAICS 425120) according to the Bureau of Labor Statistics (BLS).[2] Just one quarter later, however, the number of these establishments plummeted by 27%. 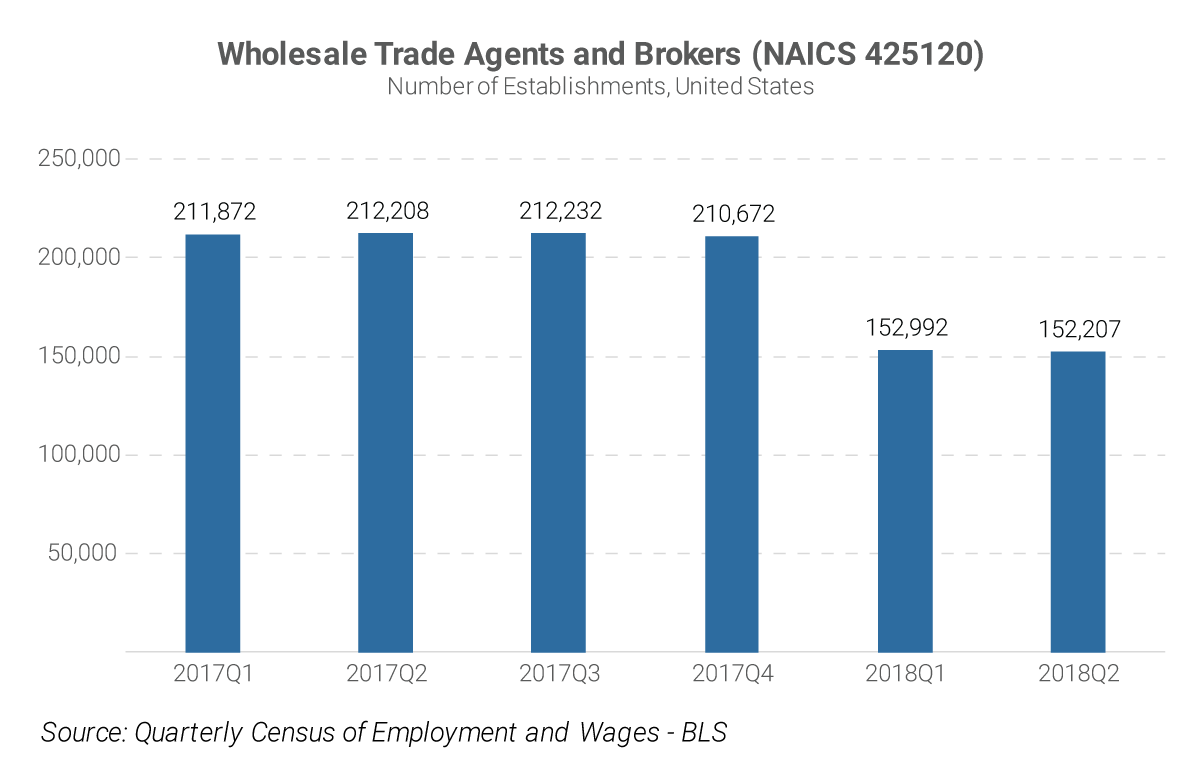 This sharp drop was widespread. Twenty states experienced a decline exceeding 40% in these wholesale establishments—some examples being Massachusetts (-40.5%), Tennessee (-43.7%), and Minnesota (-49.3%).[3]

What happened to all these companies? Did they go out of business? Is this type of thing common?

First, no, this isn’t common. There were over a thousand six-digit NAICS industries with at least a hundred private sector establishments in 2017Q4 or 2018Q1 and the average change[4] in the number of  establishments was a comparatively mild one percent.

Second, this is not necessarily indicative of a massive industry shift or business failure. The BLS is quick to point out that the QCEW data set from which establishments counts are taken is not intended to be a time series.[5] Historical data from the QCEW program may not be revised[6] even though changes in method or definition take place. So while these changes may result in a shift in the data, they may not indicate a similar shift in the real-world labor market.

For example, the NAICS codes have been revised about every five years. This results in new industries, deleted industries, merged industries, and changes in industry definitions. The most recent code update occurred in 2017.[7] But a code change is not what happened with the wholesale trade agents and brokers.

There is also the case where an adjustment in categorization practice takes place. This happened in 2013, for example, when there was a large shift in establishments between private households and services for the elderly; there was also an adjustment in the funds, trusts, and other financial vehicles sub-sector.[8]

Is this what happened with wholesale trade agents and brokers in 2018? Per the BLS, rather than a change on par with the 2013 adjustments, this was more so the accumulated effects of industry reassignments based upon returns of the Annual Refiling Survey (ARS).

Most businesses are required to complete the ARS once every three years, and it is this information that aids in establishments being categorized into their best-fit NAICS code. These assignments may change over time as individual businesses change their scope of operations. Recategorizations from the ARS returns can be “saved up” and applied within QCEW at the change of calendar year. This is what happened with the wholesale trade agents and brokers industry.

Certain NAICS codes can get used as a “catch-all” category for establishments that cannot be clearly assigned into a more specialized code. NAICS 425120 is one such category. Once sufficient information on an establishment is gathered, however, better categorizations can be made.

We can’t say for certain what exactly happened to each of the establishments that had been assigned in NAICS 425120. In order to do that, we would need access to the underlying firm-specific data to track changes in the codes of the involved companies. Absent that, however, we can look at the aggregate numbers to have a pretty good idea where the bulk of the recategorizations likely occurred.

As seen in the table below, a wide variety of wholesalers registered increases from the end of 2017 to the beginning of 2018. The largest change by count of establishments was in medical, dental, and hospital equipment and supplies merchant wholesales which increased by 5,377 establishments. One of the largest increases by percent change occurred in plastics materials and basic forms and shapes merchant wholesalers, which was up a whopping 93% over the same period.

It may finally be of interest to note some of the geographies with large changes in NAICS 425120. Below are some counties[9] which had especially significant shifts.

[2] These data are per the Quarterly Census of Employment and Wages (QCEW). NAICS stands for the North American Industry Classification System.

[3] Only two states (Georgia and South Carolina) did not have a decrease and the decline was just slight in some others such as Virginia and Maryland (down 2.0% and 2.9%, respectively).

[4] More specifically, the median change in magnitude in the count of private sector establishments was 1.1%.

[6] To be precise: “QCEW data are regularly updated after their initial release and are not considered final until the end of the first quarter of the next reference year. Once data are final, they are not edited.” https://www.bls.gov/opub/hom/cew/presentation.htm

[8] These changes are described in detail here: http://www.chmuraecon.com/blog/2014/january/27/recent-industry-reclassifications-have-major-impact-on-analysis-in-health-care-finance-sectors/.

[9] This list includes only actual counties rather than “unknown location” categories such as FIPS 29999 which corresponds to a county-level category labeled, “Unknown Or Undefined, Missouri.” These “unknown location” categories (found in every state) are used for employees who cannot be classified as working in any one county or who are working at sites that haven’t yet been classified. Some of the largest declines in wholesale trade agents and brokers from 2017Q4 to 2018Q1 occurred in such unknown location categories.