The National Center for Education Statistics recently released preliminary completions[1] data for U.S. postsecondary schools for the 2015-16 academic year. Some of the trends in these data are highlighted below.[2]

From 2010 to 2016,[3] completions in Computer and Information Sciences and Support Services (CIP[4] 11) grew impressively, expanding at a 6.9% annualized pace, over three times as fast as the overall growth rate in completions (2.0%). Growth in this computer field was especially robust in master’s degrees, which more than doubled during this period from 18,114 to 40,316. Bachelor’s degrees in computer programs also experienced strong growth, moving from 40,446 to 66,559 over the same period. 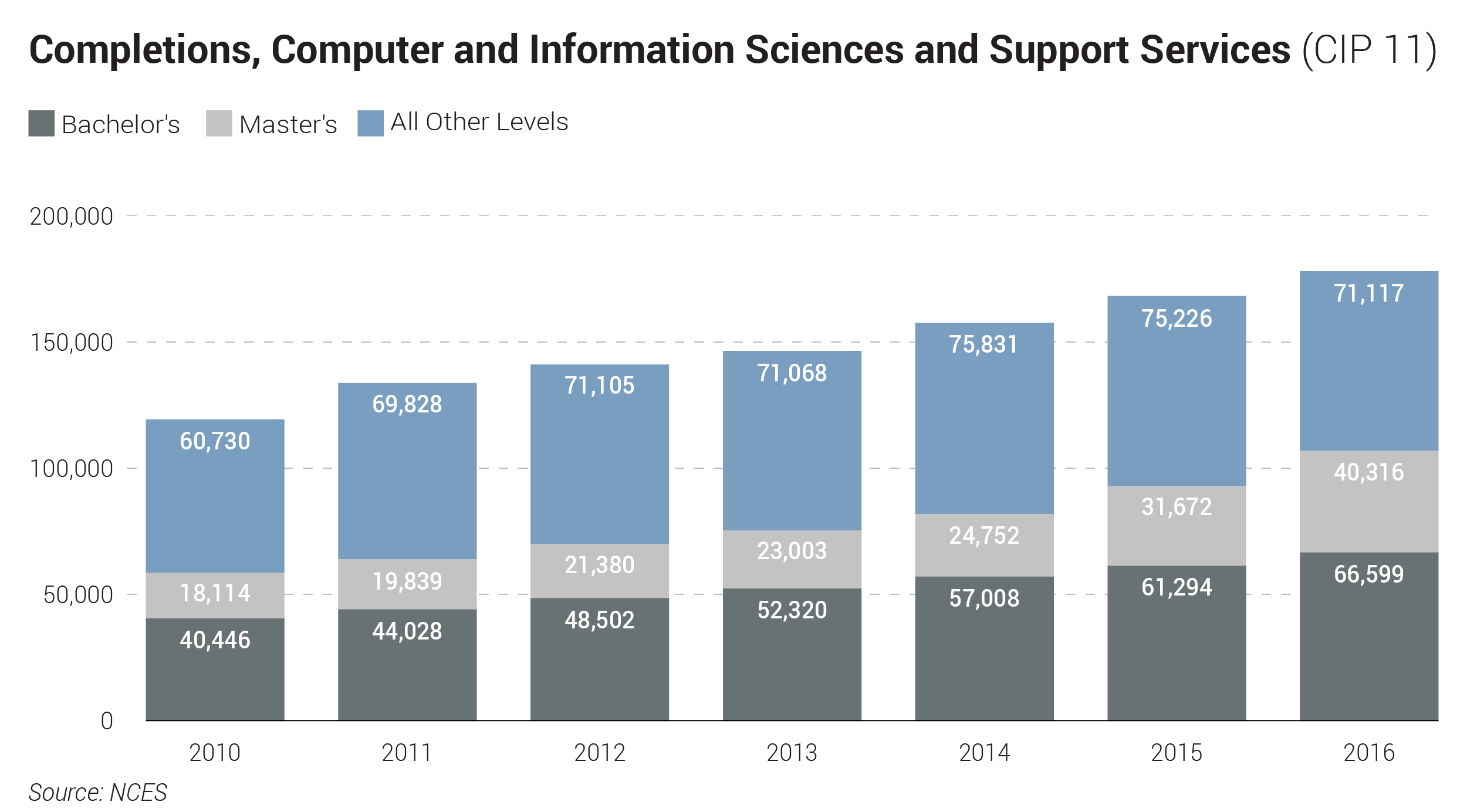 Among the fastest growing individual programs over the past several years are those found where the fields of business and mathematics intersect. Programs in Management Sciences and Quantitative Methods (CIP 52.13) saw impressive growth over the last six years; for example, Business Statistics (CIP 52.1302) surged from 70 completions to 963 during this time, and Management Sciences and Quantitative Methods, Other (CIP 52.1399) approximately tripled from 638 to 1,908 over the same period. Awards in Economics (CIP 45.06) also grew strongly over this period, including Econometrics and Quantitative Economics (CIP 45.0603) which increased from 242 to 1,241. Large gains were also posted in Statistics (CIP 27.05) and Applied Mathematics (CIP 27.03), including Financial Mathematics (CIP 27.0305) which surged from 351 awards in 2010 to 1,366 six years later. 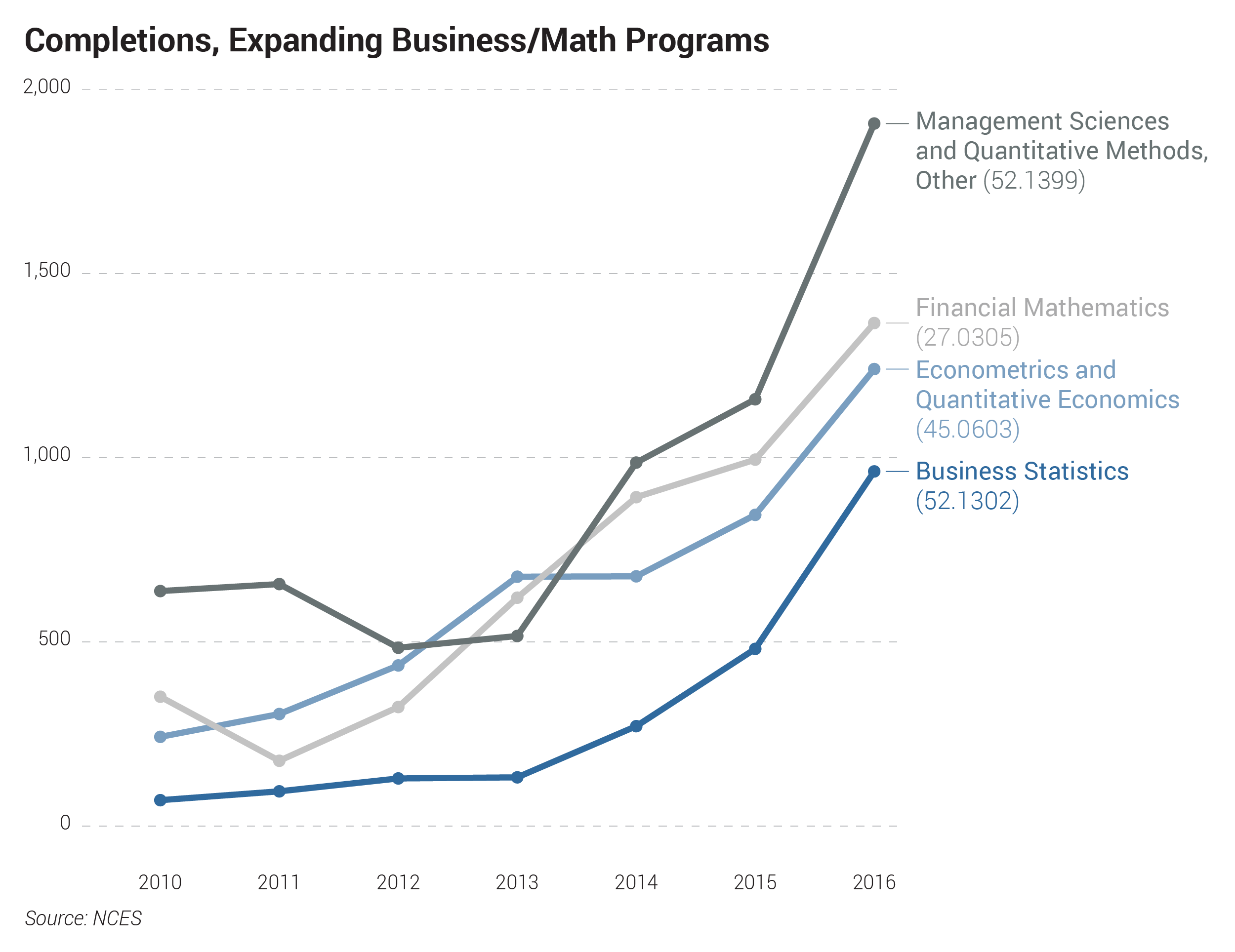 Not everything has been growing, however. From 2010 to 2016, completions in Health Professions and Related Programs (CIP 51) expanded for bachelor’s degrees and all higher levels, but declined in all levels lower than a bachelor’s (associate’s and certificates of less than four years). Some of the big losses in programs that are primarily at those levels are illustrated below. The biggest drop was for Medical/Clinical Assistant (CIP 51.0801) which fell from 121,618 to 77,794 awards over the six years ending 2016. Licensed Practical/Vocational Nurse Training (CIP 51.3901) slipped the same period from 58,813 to 44,315. Some smaller health programs also recorded steep declines from 2010 to 2016: Massage Therapy/Therapeutic Massage (CIP 51.3501) dropped from 27,495 to 17,680 and Pharmacy Technician/Assistant (CIP 51.0805) saw its completions fall from 20,212 to 11,795. 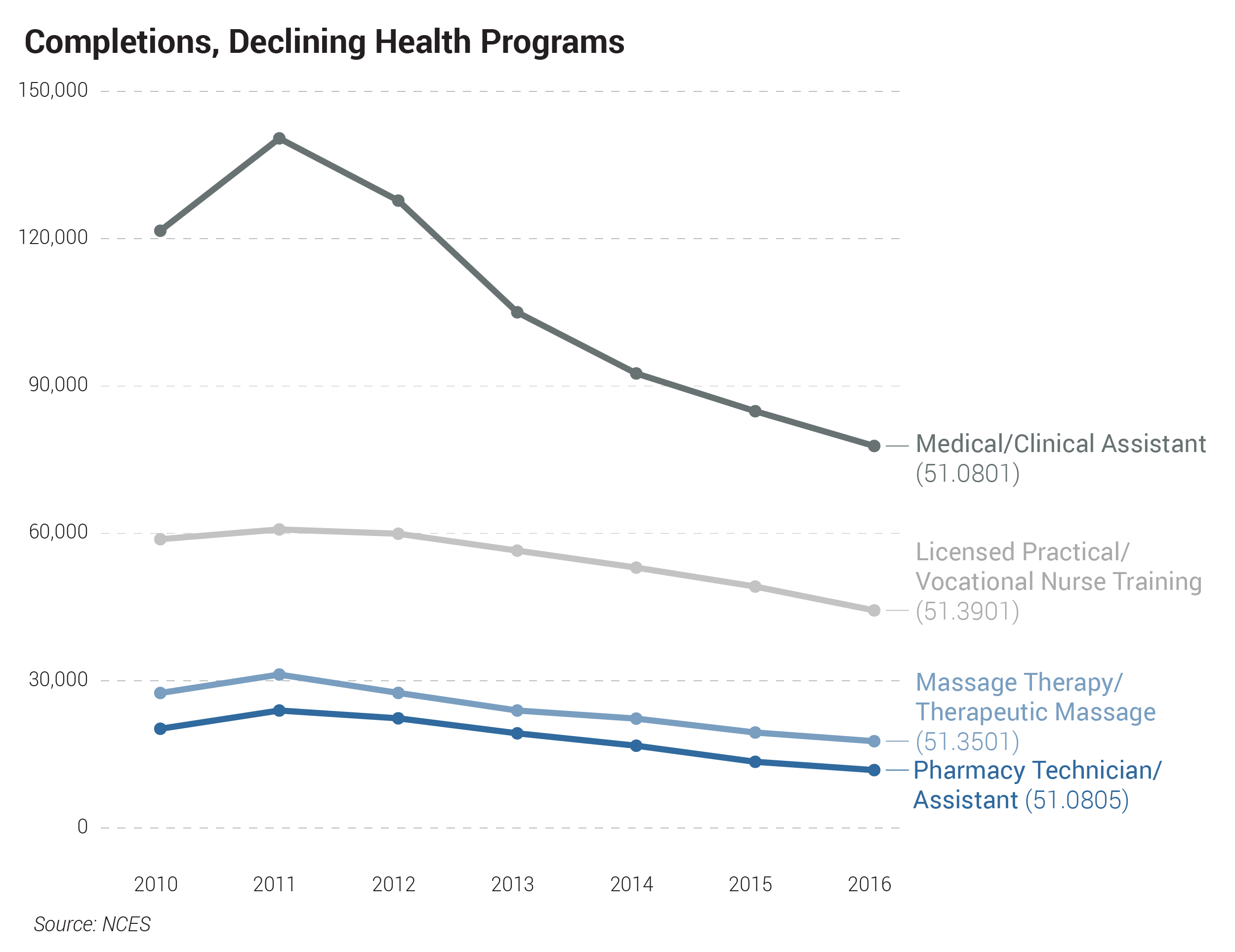 Certificate-level programs, though generally declining in the health professions, have grown elsewhere. Certificates that take less than a year to complete grew strongly in Precision Production (CIP 48) with most of that growth driven by an increase in Welding Technology/Welder (CIP 48.0508), expanding from 13,131 completions in 2010 to 22,261 in 2016.[5] Certificates requiring less than a year to complete also have been growing among programs in Business, Management, Marketing, And Related Support Services (CIP 52) which expanded from 39,509 to 64,901 awards over this same period.

[1] “Completions” refers to degrees and other awards granted by postsecondary schools. The NCES completions data covers all schools participating in any federal financial assistance program authorized by Title IV of the Higher Education Act of 1965, as amended; institutions not participating may not be represented in this data set.

[2] Note that some of the trends shown here may be influenced by individual programs being reclassified. For example, a school’s program may be classified under Curriculum and Instruction (13.0301) in the NCES data one year, and the next year the same program may be classified under Education, Other (13.9999). Such changes are not necessarily typical or haphazard, but they do occur.

[3] For simplicity, single years are used to refer to school years with the year referenced being the end year; for example, “2016” designates the 2015-16 academic year.

[4] “CIP” stands for the Classification of Instructional Programs.