The Graying of America

Most people know that the percentage of older Americans is increasing dramatically. What’s less known to the average person is how that graying will impact different areas of the country.

The overall demographic shift is illustrated in the chart below that shows four age cohorts. The first three are each based on equal twenty-year spreads: people age 0 to 19, those who are age 20 to 39, and the age group 40 to 59. The fourth cohort is defined as those age 60 and older. 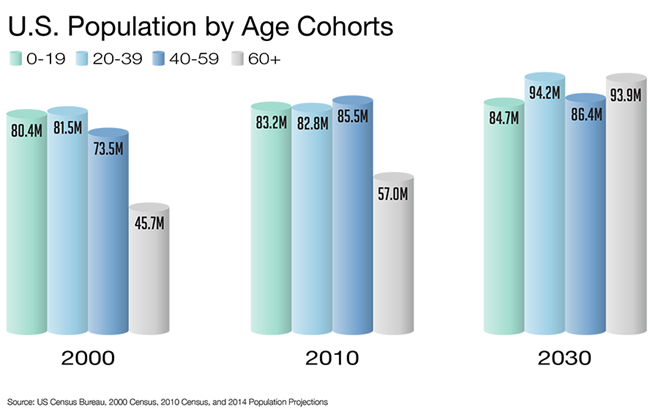 The reason for this increase is the aging of the baby boom generation along with the overall increase in life expectancy. The ramifications are many. The shift affects consumer spending patterns, health care needs, labor force mix, and so on.

The demographic shift will be manifest differently throughout the nation. The map below shows the age mix for every county in the nation as it transforms from 2010 through 2030. Each county is colored according to the cohort that is the largest during that given year (using the same cohorts from above).

A word about these data: the age mix data at the county level for 2010 are derived from the decennial census. The projections by age through 2030 at the national level follow forecasts from the Census Bureau. The county-level projections are produced by Chmura and can be accessed through the JobsEQ labor market system.