The Return of Self-Employment?

Most people in the United States work for someone else, but a portion of the population works only for themselves. Despite the many challenges—monitoring one’s own work hours, calculating taxes, and even taking cuts in pay when the business experiences a loss in revenue—approximately 15 million people were self-employed in the United States in 2015.[1]

Characteristics of the Self-Employed

Accounting for about 6% of employment in the United States, unincorporated self-employed people across the nation support themselves in a wide variety of industries. At the major sector level, most self-employed workers are found in construction; professional, scientific, and technical services; and other services. The largest industry at the 4-digit NAICS level is services to buildings and dwellings, accounting for 514,470 jobs in the second quarter of 2019. This industry includes those who provide janitorial, landscaping, and pest control services. The next largest 4-digit industry is animal production (proprietors),[2] in which 463,512 self-employed workers are mainly involved with raising animals. 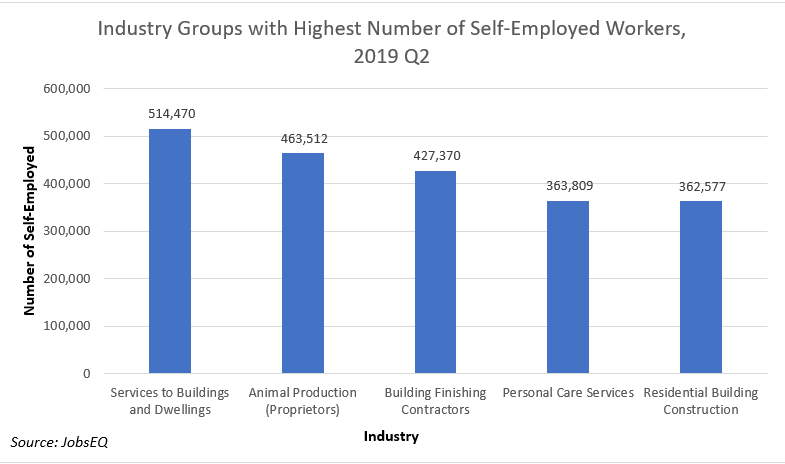 Workers who choose to become self-employed experience many benefits a staff job normally wouldn’t offer. For example, they can decide to collect all the commission, work when convenient, and follow their own passion. Despite the perks, self-employed jobs can be riskier to pursue, and the risk may not pay off. The average self-employed wage is $39,631, with three of the five industries above (services to buildings and dwellings, building finishing contractors, personal care services) falling below average.

The highest annual wages in self-employment are found in gambling industries, where workers average $199,423 annually. The second highest is securities and commodity contracts intermediation and brokerage ($166,842) followed by offices of physicians ($139,184). Additional self-employed workers in finance enjoy a high wage, earning $131,128 annually in securities and commodity exchanges. 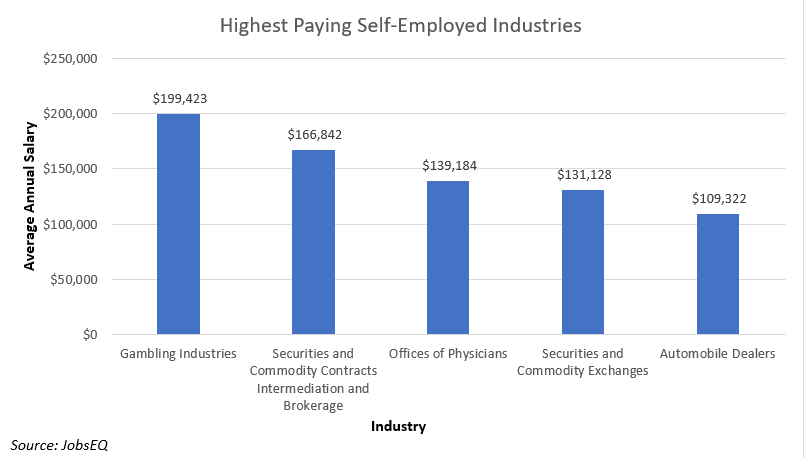 Adding to the risks, opportunities for self-employment seem to dry up during downturns; self-employment declined sharply during and following the Great Recession[3] and has not yet recovered to pre-recession levels. In 2007, more than 10.4 million people were self-employed, but that fell to less than 9.5 million in 2011. Self-employment has generally been trending upward since 2014, especially with the recent rise of gig economy jobs, but the slow recovery may be a sign of uncertainty about future economic conditions and an unwillingness to take that risk. 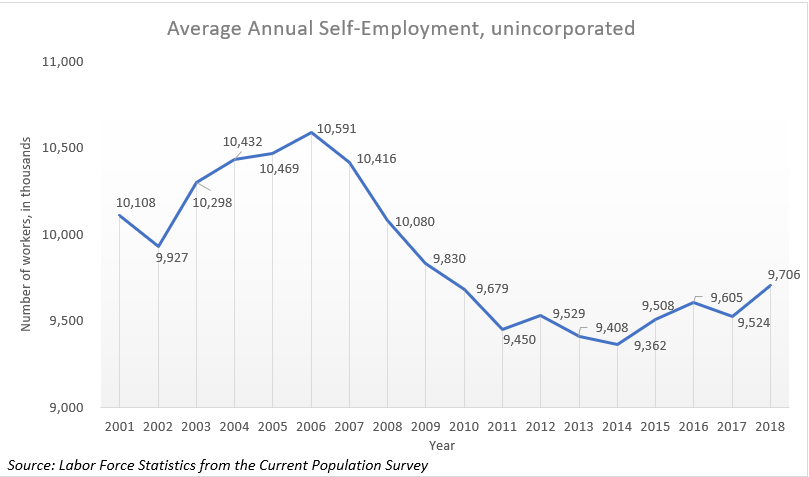 The self-employed work in a variety of occupations, some of which are projected to grow over 4%, on average, each year. As shown in the graph below of the fastest growing occupations, self-employment of physical therapists assistants and aides is expected to increase by an average annualized 4.6% which translates to over 50% from 2018 to 2028.[5] 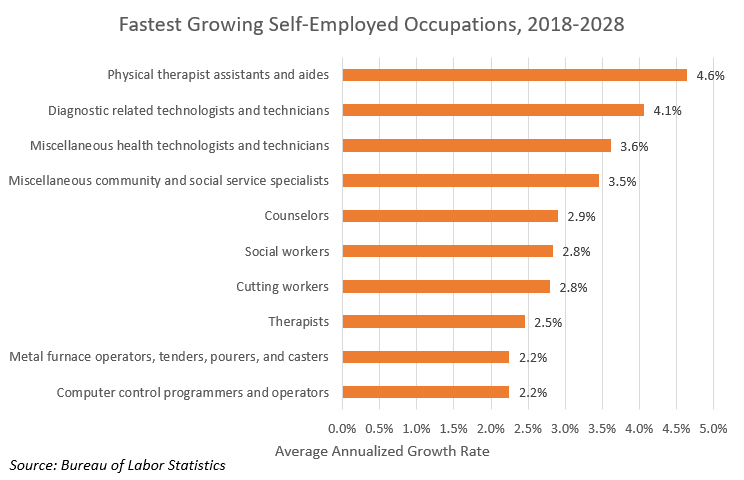 At the major group level (2-digit SOC), self-employment is expected to grow the fastest in healthcare support, social and community service, and computer and mathematical occupations.

While this blog shows some overall trends and characteristics for the self-employed, the mix of self-employed workers, wages, and growth rates can vary significantly by region. Detailed self-employment data in JobsEQ® is designed for you to investigate local activity.

[2] This industry is a special group used in JobsEQ to capture all animal production self-employment under NAICS 112.

[5] These occupations are examined at the 5-digit SOC level.