Marine Jobs in the Ocean State

Rhode Island may be nicknamed the “Ocean State,” but “Marine” appears more often in online job ads than “Ocean” does.

Though there are a number of jobs available for someone who loves the ocean, many are not designated specifically in the standard occupation codes. For example, there is no Standard Occupational Classification (SOC) code specific to coastal engineers or oceanographers. A review of online job postings can help identify these niche careers and tie them back to standard codes for further analysis

Among online job postings[1] from a recent 30-day period in Rhode Island, five ads included “ocean” in the job title, including Professor of Oceanography and Ocean Lifeguard. However, 25 jobs included the keyword “marine” in the title, including Test Engineer – Submarine Combat System; Marine Aluminum Welder; and Marine Diesel Mechanic. These SOC designations for these 25 jobs are shown in the table below.

Employers posting the most online ads overall in Rhode Island over this period include the Graduate School of Oceanography at the University of Rhode Island; General Dynamics; and General Electric. The state is home to a number of defense related employers—defense contract spending totaled almost $1.5 billion in Rhode Island in fiscal year 2015, including $732.5 million in contracts for ships, small craft, pontoon, and docks products and services.[2]

Getting back to the “marine” related jobs, further information can be gained by considering the above list of occupation categorizations as a group of “possible marine” occupations. For example, more than 16,000 people are employed across the state in these “possible marine” occupations, though they are certainly not all tied to marine or ocean related industries. Some of the industries employing these occupations include ship and boat building; national security and international affairs; computer systems design and related services; and colleges, universities, and professional schools. Additionally, though it is more concentrated in zip codes bordering the water, employment in these occupations is not strictly limited to the coast. 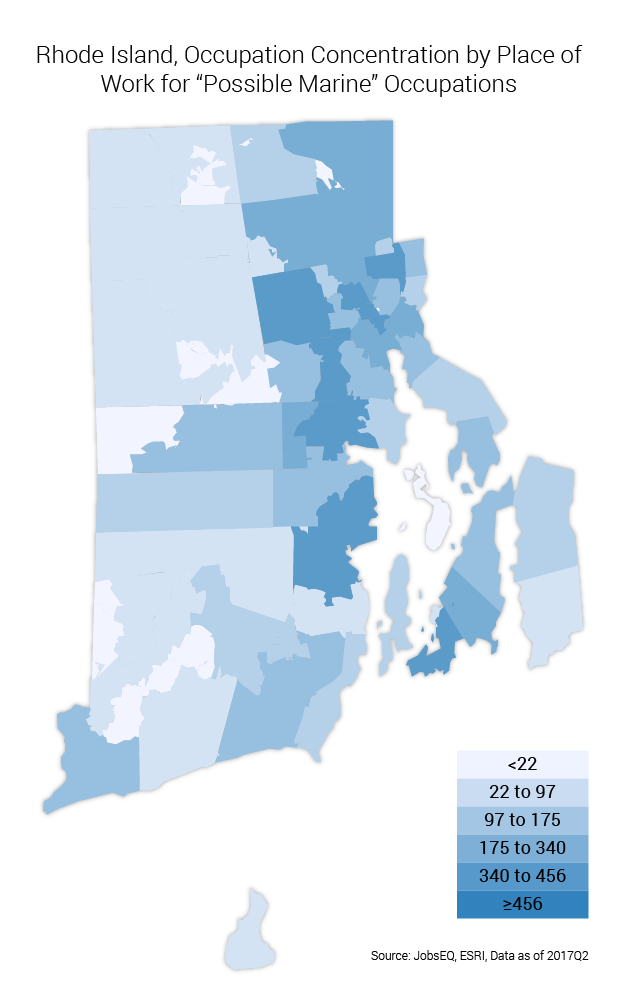 As a whole, this group of occupations have grown faster than the state average over the last five years, and many are projected to continue growing over the next ten years.[3] The “possible marine” occupations grew at an annual average rate of 1.3% between 2007 and 2017, compared to 1.0% across all occupations. The occupations in this group with the fastest growth forecasts for the next 10 years are information security analysts; computer user support specialists; plumbers, pipefitters, and steamfitters; and medical scientists, except epidemiologists.

[1] The RTI (Real-Time Intelligence) data set is solely constructed and maintained by Chmura Economics & Analytics. The data set consists of online job postings, updated daily and categorized to the 8-digit SOC level. Job counts represent ads for the United States that have been deduplicated and were active at any point in the 30 days prior to September 20, 2017. RTI is available through the JobsEQ online platform.

[3] Source: JobsEQ®. These region-specific forecasts within JobsEQ are consistent with the national level forecasts developed in the BLS Employment Projections Program.