The Decline in College-Aged Students

The “echo boom” of births in the United States peaked in 1990. The children of that peak became college-freshman aged around 2008. Since then, the population of 18 to 19 year olds in the nation has been trailing off. Children born at the peak of the echo boom are now about age 25, and most from that peak are out of college. As a result, the size of the prime college-aged population is on the downswing. 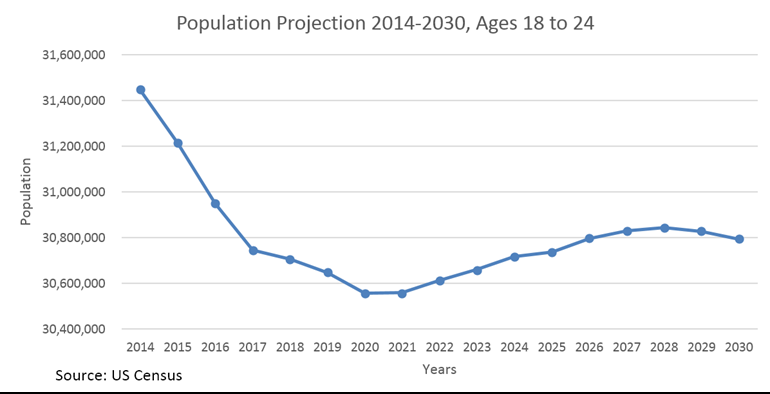 Some areas of the country will be seeing more drastic declines than this, while other areas can expect to see no drop at all. Nine states are projected to see growth in the 18 to 24 cohort over the coming five years. From 2015 to 2020, states expected to see this population cohort expand include Utah (+3.9%) and Texas (+3.4%).On the other hand, states forecast to see steeper-than-average declines include Michigan (-6.9%) and New Mexico (-6.8%).

There is some good news, however, for those wanting to see an increase of population in the college-aged cohort. The number of births in the United States hit a trough in 1997—many children born in that year are just beginning their freshman year in college right now. Following 1997, the number of births began trending upward and peaked in 2007 at a height surpassing that of the echo boom. So while postsecondary schools are facing some unfavorable demographics in the short run, another swell is on its way.

Research support was provided by Allison Magee and Asim Timalsina.

[1] Based on Fall 2013 enrollment data from the 2014 Digest of Education Statistics.