Turkey By the Numbers

As the most common main dish of Thanksgiving dinner, turkey prices have a large impact on the overall price of the holiday meal. The average price per pound of a frozen whole turkey rose 1.3% last month from September to $1.56 according to data from the U.S. Bureau of Labor Statistics. But turkey prices have been coming down over the past two years. From October 2014, the price was down 6.5% and was 14.3% lower than its September 2013 peak of $1.82 per pound. 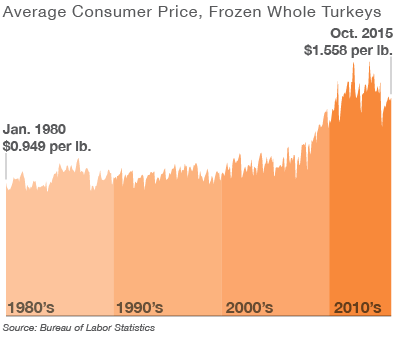 For six straight years beginning in 2009, turkey prices have declined from October to November suggesting that the average price paid this month may actually be less than $1.56 per pound.

Turkey prices have risen faster than overall inflation over the past decade, increasing 37% compared with a 19% increase in overall consumer prices.

And where are all those turkeys produced around the nation?  Based on the number of people employed, Minnesota and North Carolina topped the list in the first quarter of 2015 with 890 and 870 employees, respectively.  Missouri (527 workers), California (513), Ohio (292), and Indiana (286) make up the other states that employ at least 200 people in turkey production. 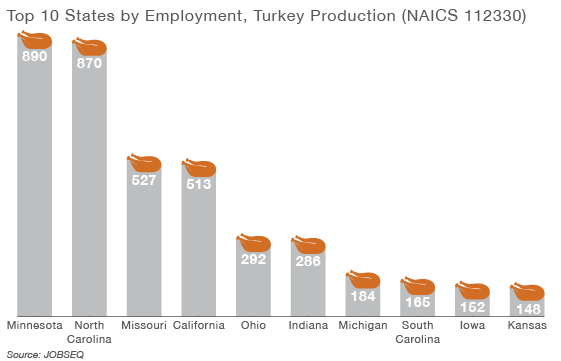