Advanced Education - Beneficial to Job Growth or No?

The benefit of higher education for an individual is well established: higher wages and lower unemployment rates among other things. But what about the benefits for communities? A recent study suggested a surprising answer.

What Matters to Metros, published by the Fund for Our Economic Future, is an intriguing look at the factors that influence the economies of U.S. metropolitan areas. It found that higher education is linked positively with income, output, and productivity growth, but its data did not support a positive link with employment growth.

Furthermore, the data show that metropolitan areas which have a large percentage of workers with low educational attainment (no high school diploma or equivalent) more often have faster job growth.

This latter fact, actually, should not be so surprising. After all, since businesses want to minimize costs it is reasonable that high-labor-intensive industries would relocate or expand in areas with a large number of low-skilled workers for filling low wage jobs.

Furthermore, as we pointed out in a previous blog, middle-skilled jobs in aggregate have been declining over the past decade while lower-skilled jobs have been on the upswing.

But the same blog also showed growth among the jobs requiring the most skills. Because of this, shouldn’t we see a positive link between higher educational attainment and regional job growth?

For this answer, we must return to the Fund for Our Economic Future data. A first look shows that, indeed, there appears to be virtually no relationship between employment growth (1990-2011) and the percentage of population with educational attainment of a four-year degree or higher (which we’ll call “advanced education”).

Each dot in the below chart represents a metropolitan area (encompassing 115 “mid-sized” regions). The dotted line represents the trend line best fitting the data. 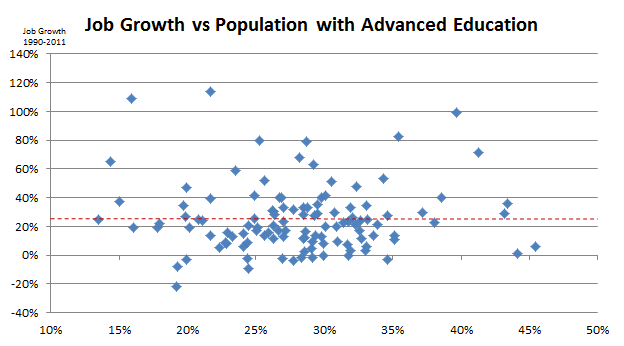 Poking around in the details, however, turns up some curiosities. In certain subsets (such as metro areas with a small percentage of foreign born or metro areas in the Northeast and Midwest), we find a positive correlation between advanced education and job growth. Could the variables be interacting in complex ways so that the positive job growth effects of advanced education in communities are obscured by other factors?

Apparently so. If we adjust job growth against expectations based upon some other variables, the effect of advanced education is clearer to see.

For this purpose, I’m not going to attempt to adjust job growth for all possible variables, but will just look at two that have big impacts: (1) the industry mix—that is, the share of jobs in manufacturing, government, retail, and other sectors—and (2) the business climate. This latter factor was explored and defined nicely in the Fund for Our Economic Future work and comprises three pieces: tax costs, the rate of unionization, and energy costs.

The below chart illustrates the strong correlation between job growth and a composite index of industry mix and business climate.

Using this relationship to set expectations, we can now examine how metros perform against this benchmark. Do metros with higher rates of advanced education more often perform above expectations? The answer is yes. 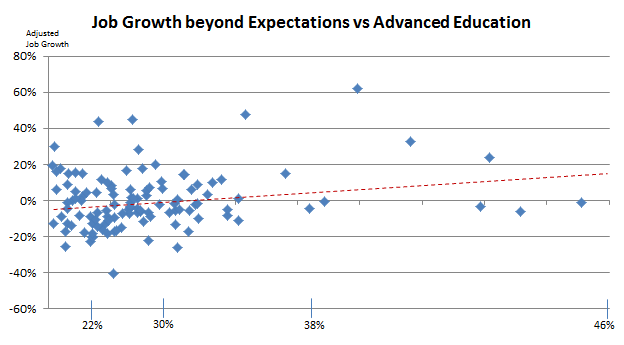 It looks like higher education is, indeed, correlated with job growth! There are, however, a couple of items that need to be highlighted.

First, you may notice the horizontal scale on the last chart is irregular. This is because a stronger link between advanced education and job growth was found according to an exponential relationship rather than linear. Essentially, incremental changes in advanced education were found to have a more pronounced effect on job growth where education was higher to begin with. While certainly interesting, the exact nature of this relationship should be explored further before concluding that this non-linear relationship is the best, most accurate model.

Also, it should be noted that while rates of advanced education do positively influence job growth, the data show that other factors are more closely related. For example, industry mix, business climate, and immigration each appear to be more strongly linked with job growth than the rate of advanced education.

This last point does, however, raise some questions about the community benefits of increasing education and skill levels from the lowest skill levels to mid-skill levels. It stands to reason that we should see benefits in terms of income and productivity. Perhaps we can find job growth benefits as well at this level, but that will have to wait for another blog.