Posted on November 6, 2017 by Xiaobing Shuai and Greg Chmura

Chmura’s economic impact model is an integral component of its proprietary JobsEQ technology platform. It gives practitioners in economic development, workforce development, education, and other areas a tool to evaluate the economic impact of a potential project such as a business expansion or relocation. It allows for a seamless transition from JobsEQ’s industry and occupation data to economic impact analysis, thus ensuring data integrity and consistency.

Chmura’s economic impact model is based on economic theory related to the input-output (I-O) accounting of the U.S. economy, while incorporating other data sources and industry best practices. It starts with the national I-O matrix published by Bureau of Economic Analysis (BEA). With that, there remain three questions of practical importance and that is where various models differ.

There are several economic impact models. They all use the same fundamental economic I-O theory, and are based on the same national I-O matrix from BEA. However, each model uses its own proprietary method to address the three challenges noted above. Chmura’s methodology takes into consideration the regional industry mix, supply capacity, and economic diversity, among other factors, to estimate the I-O matrix for each county and state in the country. Using the latest wage and salary data, Chmura’s model converts the output multipliers into employment and labor income multipliers of a region. Finally, Chmura imputes the input-output matrix at the 6-digit NAICS industry level, utilizing the employment and wages of those industries.

When comparing models from various providers, the indirect output multipliers[1] for the United States should be very similar in all models because these multipliers are almost the direct results of the inversion of the national I-O matrix which most models use (Figure 1). Other multipliers will vary based on customization by the provider.

At the national level, the first customization occurs for the induced output multipliers,[2] as different models use a variety of additional data to estimate the percentage of wages and salaries devoted to household spending.

Different providers of economic impact models also have their own proprietary methodologies to estimate state and local impact multipliers. The essence of this process is to construct state and local input-output matrices based on the national matrix. Academic research indicates that many factors affect how much each industry purchases from local areas, including the availability and the size of supplying industries, industry mix, as well as trade flows. After regional input-output matrices are customized, indirect and induced output and employment multipliers can be calculated as was done for national multipliers.

Using Virginia as an example as shown in Figure 2, JobsEQ’s regional multipliers tend to be more conservative than some other popular impact software multipliers. The reasons lie in the customization method used by Chmura. As previously noted, Chmura uses the most recent quarterly wages in the model, which tends to result in lower employment multipliers.

Furthermore, Chmura uses additional methods to constrain economic multipliers. For example, in other impact models it is not uncommon to find county multipliers being larger than state multipliers for certain industries. Chmura’s model has geographic consistency checks so that multipliers are logically consistent when comparing a smaller region to a larger region in which it is contained (e.g. comparing a county to its state). 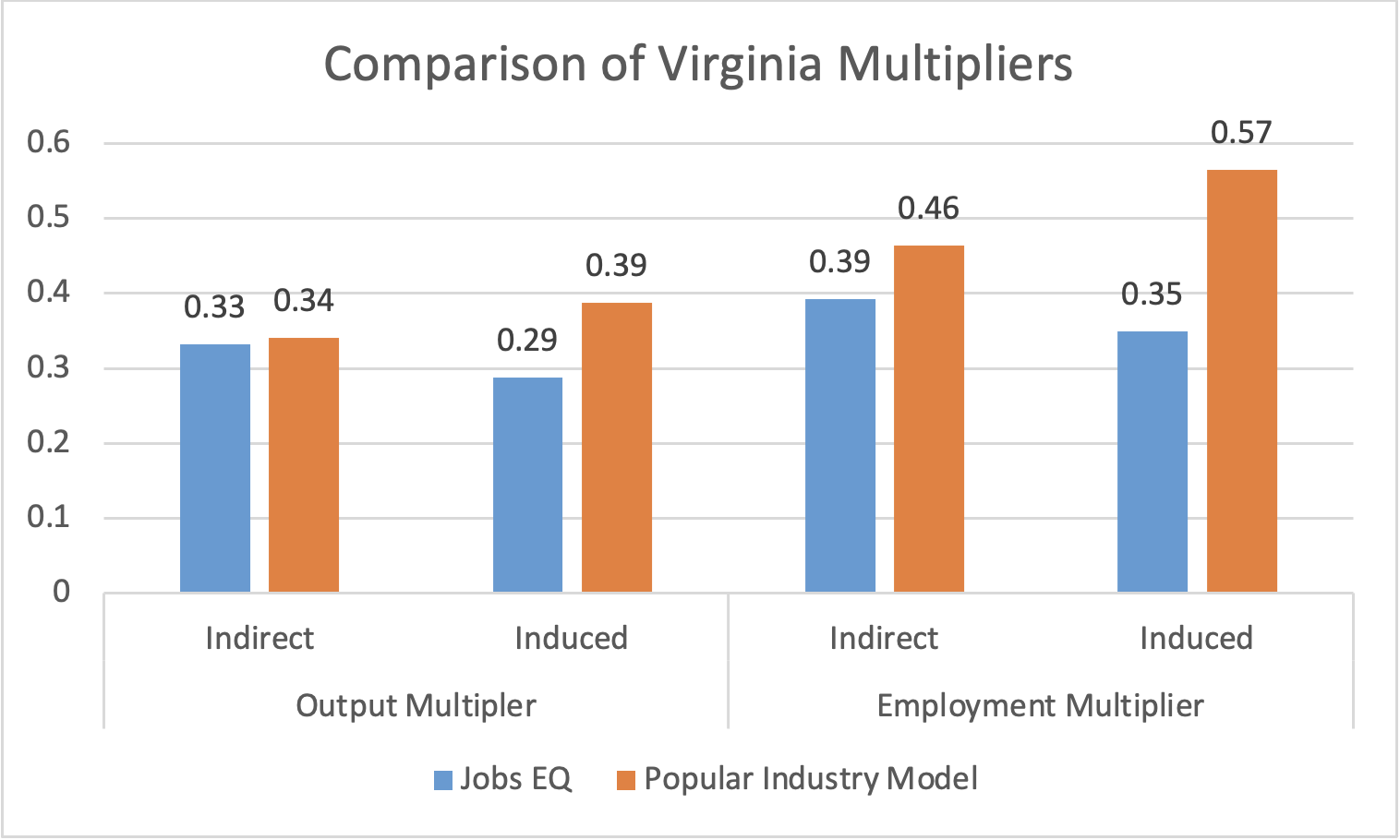 Finally, while economic multipliers from various models provide good estimates of the economic impact, they are still model estimates based on industry averages. The estimated multipliers may deviate from an actual event where specific suppliers are known. When supplier data are available, it is a good practice to incorporate business-specific data to generate more accurate multipliers. For that reason, Chmura’s economists routinely conduct business surveys and use that survey data to improve the estimation of economic multipliers.

[1] The indirect multipliers estimate ripple effects due to the supply chain, the economic activity generated by suppliers of goods and services to the industry in question.

[2] The induced multipliers are used to estimate ripple effects due to household spending, the economic activity generated by employees spending wages as consumers.