Posted on December 1, 2016 by Xiaobing Shuai

With the election over, many people are asking, “What are the possible changes to the economy under the Trump Administration?” With the presidency and both houses of Congress under the control of the Republican Party, big shifts are likely regarding future economic policy.

To understand the effect of the new administration’s policy on the economy, Chmura prepared two forecasts for the nation for the years 2017, 2018, and 2019. One is the “status quo” forecast that assumes no change in economic policies, and the other is the forecast assuming the new administration will implement many policy changes promised by the Trump campaign.

Chmura did not prepare a long-term forecast because the long-term economic effects of these policies are much less certain.  If economic activity does not increase enough to offset tax cuts and new spending, it is not clear whether the new administration will pay for the proposed tax cuts and infrastructure spending by borrowing or reducing the federal budget. The approach taken will have distinct impacts on the long-term economy. In addition, there will be a midterm election in two years and another presidential election in four years, which may result in further changes to the economic policies of the Trump administration.  Thus, any economic projection beyond two years is more uncertain and therefore less meaningful.

Under the status quo scenario, Chmura projects that the U.S. economy would continue its current trajectory of modest economic growth, with gross domestic product (GDP) forecast to expand 2.4% in 2017 and 2.7% in 2018. These are improvements over the slow GDP growth of 2016, which is expected to be 1.6%.

The Trump economic policies will have widespread impacts on the economy, affecting all major components of GDP, i.e., personal consumption, business investment, government spending, as well as imports and exports.

The key component of the Trump economic policy package is the tax cut plan that will reduce both corporate and individual income taxes.  For example, the Trump proposal plans to cut the corporate income tax rate from the existing 35% to 15%. This measure, combined with other policies on lowering taxes on repatriated overseas profits and allowing businesses to expense investment rather than depreciate it, can boost corporate profits and business investment.

Due to the sheer size of personal consumption expenditures in the U.S. economy, any changes in individual income tax can potentially have significant effects on the economy. The proposed Trump policy plans to cut taxes for individuals in all income groups, even though the degree of reduction varies. For example, the marginal tax rate for the top income bracket will be reduced from 39.6% to 33.0%.  The plan also calls for the elimination of the alternative minimum tax (AMT), the estate tax, and the gift tax. Based on an estimate by the Urban Institute & Brookings Institution, the plan would cut taxes by $2,940 in 2017 for an average household.[1] The tax cut is expected to stimulate consumer spending and boost GDP, yet households may also use some of the tax savings to pay down debt or increase their personal savings.

The new administration also plans to reduce business regulations, including some key environmental and financial ones. Potential changes can be implemented to the Dodd-Frank Act regulating financial institutions or the Clean Power Plan that affects energy companies.[2] Reduced regulations tend to stimulate business investment, which could accelerate productivity and GDP growth.  In addition, it is likely that the new administration will relax environmental regulations and allow more domestic energy exploration and production. This will increase the domestic energy supply and keep oil prices down. Lower oil prices can dampen future inflation, while increasing investment and personal consumption at the same time.

On government spending, the new administration has promised to increase spending on military and infrastructure. This spending can provide a stimulus to the economy. On the other hand, the Trump plan also vows to decrease the size of government agencies, which tends to reduce overall government spending. The net effect of these policies will depend on whether some or all of the plans are implemented.

Finally, the possible changes to trade polices by the new administration may include the withdrawal from the Trans-Pacific Partnership (TPP) and a renegotiation of the North American Free Trade Agreement (NAFTA). The new administration also intends to pressure China to stop manipulating its currency, which may cause the Chinese currency to appreciate thereby reducing imports from China.  The general effect of these trade policies is to impose some type of restrictions on international trade. While both exports and imports can be affected, it is expected that a larger reduction may occur to imports, thus cutting the U.S. trade deficit and increasing GDP.

If all of these policies are implemented, Chmura’s model indicates that they will start to impact the U.S.  economy in the second half of 2017.  It is projected that the proposed economic policies of the new administration can boost 2017 GDP growth by 0.6 percentage points, from 2.4% under the status quo scenario to 3.0%.  For 2018, the new policies can increase GDP growth to 3.9%, up from 2.7% under the status quo scenario. 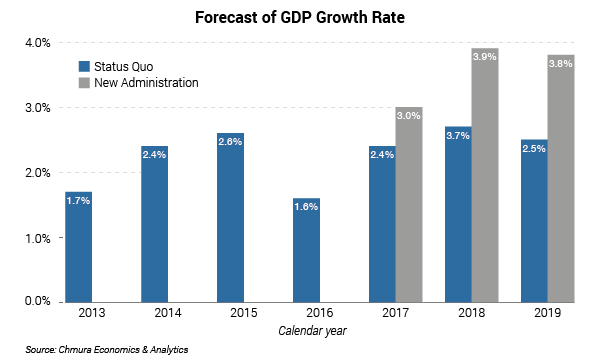